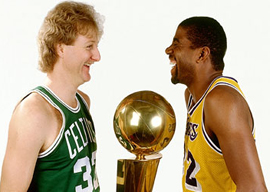 Ann Coulter recently found herself in hot water by asserting that the Republicans’ blacks are better than the Democrats’ blacks. NBA Commissioner David Stern is probably sighing to himself about how basketball’s 80s and mid-90s blacks were better than today’s blacks.

Stern canceled all NBA games through November, a move that means the entire 2011-2012 season is almost sure to be called off due to contractual disputes between the owners and players. Pity, too: The 2010-2011 season’s cable ratings were producing record numbers. (Few games are broadcast on network TV anymore; the demand isn’t there.) Last season’s NBA Finals, featuring the Dirk Nowitzki-led Dallas Mavericks v. the Miami Heat’s three-headed monster, reminded some longtime fans of the titanic battles between Larry Bird and Magic Johnson from the 1980s.

Stern will fondly recall those Boston teams—the whitest in a league that has been consistently 70% or more black since 1980—that had Bird, Danny Ainge, and Kevin McHale taking the NBA to unprecedented business heights with their classic struggles against Magic Johnson and Kareem Abdul-Jabbar’s Los Angeles Lakers.

“The NBA’s teams are overvalued, and the silence surrounding the lockout only confirms this.”

It could be argued that the NBA’s run of success was fueled not by Michael Jordan, but by a reigniting of interest in basketball among white fans that began to taper off when the length of the player’s shorts began to increase. (The 2003 retirement of Utah Jazz white point guard John Stockton signified the official end of that era.)

The 1992 book The Selling of the Green: The Financial Rise and Moral Decline of the Boston Celtics argues that the Celtics’ cultivation of a majority-white roster in a league dominated by black players was a disgusting and amoral move. Two decades later, it’s obvious that a league that has now dropped to fourth in per-game attendance among professional sports (NFL, MLB, then…Major League Soccer) is in serious trouble.

Even into the Jordan-led Chicago Bulls dynasty of the 90s that produced six NBA championships, Chicago implemented the Celtics’ strategy by sporting a roster much whiter than the overall league percentage.

Complaining about this is similar to arguing that America was founded by racist Indian-killers. So what? For 20 years running, the league’s black players have had the opportunity to earn unprecedentedly lavish contracts that have made them fabulously wealthy (for a few years, that is), yet one is hard-pressed to identify other forms of labor they could perform that would pad their bank accounts like shooting a ball through a hoop does.

In 2008, ESPN’s Michael Wilbon wrote a Washington Post column noting that the Celtics were no longer the majority-white team of the past; they were now a team that reflected the league’s racial makeup.