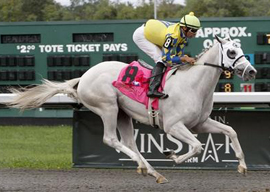 I”m not known as a reliable source of racetrack tips, so if you are headed to Churchill Downs for this Saturday’s 138th running of the Kentucky Derby, please don”t take this column as advice to wager heavily on Hansen at 14 to 1 odds. In early spring, Hansen was the Derby favorite, but a horse named Dullahan dimmed his luster by catching him with a tremendous closing charge in the Bluegrass Stakes on April 14.

Yet if you”re not a betting man, if you”re the kind of race fan whose spectatorship is limited to the Derby’s two minutes per year, then Hansen, the champion two-year-old last year, is fun to root for. That’s because he’s a horse of a different color, a virtually white thoroughbred. This makes him visually distinguishable from all the bays and chestnuts, even on the backstretch.

There’s something aesthetically striking about a white horse. Both Pegasus and the unicorn were envisioned as white. History’s most audacious propaganda painting features Napoleon crossing the Alps on a white stallion. (In reality, Bonaparte, no fool, crossed Great St. Bernard Pass in 1800 on a sure-footed mule led by a trusty guide.)

Still, the interesting thing about thoroughbreds” color is that it’s really not that interesting. Sure, some folks bet on their favorite color of horse, but that’s looked down upon by serious plungers.

Among American humans, however, color is widely thought to be the basis of race. And everybody is interested in race. For instance, more people may have expressed an opinion on the whiteness of the four main characters in HBO’s new sitcom Girls than have watched the show.

On the other hand, white folks, unlike everybody else, aren”t supposed to be interested in race. Hence, the popular clichÃ©s attempting to prove its impossibility (“How can anyone belong to more than one race?”) or unimportance. (“Race is only skin deep.”)

Yet as I”ve long suggested, the opposite is more true: Race is less about color than it is about your relatives, whether close or distant. Most humans find this topic intriguing. Due to how the US was settled by intercontinental voyages, skin color was a handy clue to your relations” continental origins. Still, to think of color as the foundation of race is to put the conceptual cart before the horse.

Is color not terribly important in racing because science has proven that prejudices based on pedigree have no place at the racetrack?

Of course not. Instead, bettors and breeders don”t have to guess about a thoroughbred’s ancestry based on his color because they can look up exactly who all his forerunners have been for centuries. In England, the General Stud Book was first published in 1791, while its American equivalent dates to 1868. The thoroughbred gene pool has been thoroughly closed on both sides of the Atlantic since the 19th century.