The Greatest Actor of His Generation 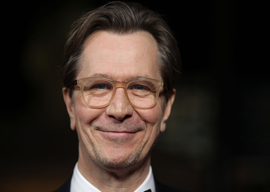 “This is just like a Hollywood awards show, but with fewer Jews.”

You”d be forgiven for assuming that’s another excerpt from actor Gary Oldman’s forthcoming Playboy magazine interview, since we”ve been hearing about the damn thing all week.

The hundreds of articles, Tweets, and blog posts condemning the acclaimed English actor can be reduced to one imaginary headline:

By now we all know the (Chinese fire) drill:
famous person says something “politically incorrect“; ordinary folks embrace him as a long-awaited prophet, while Big Gay and/or other “community leaders” condemn him; famous person (usually) issues groveling apology, leaving defenders looking and feeling like morons.

“These causes celebrities are the Easter narratives of our times, except played in reverse and with (somewhat incredibly) way more swearing and whining.”

These causes celebrities are the Easter narratives of our times, except played in reverse and with (somewhat incredibly) way more swearing and whining. In point of fact, the stupidest thing Oldman said was “I”m deeply sorry,” during a quivering amends-making turn on Jimmy Kimmel Live.

A careful reading of his entire interview reveals a 56-year-old man who’s plumb disgusted with pretty much everybody, from parents and TV producers to the papacy (“Fuck the pope”).

Oldman comes across as “an eminently reasonable man”” with a “solid perspective on life.” That’s according to a Jewish acquaintance of mine who, yes, worked in Hollywood for years. The “Official Jews” of the Anti-Defamation League, my pal added, were the real villains, drooling “over the chance to force a celebrity into obeisance to them.”

Ironically, Oldman’s remarks regarding Gibson and Baldwin concerned the arbitrary nature of these all-too-frequent post-modern Salems. Why, Oldman wondered, isn”t Bill Maher fired after joking about Hollywood lesbians, while Baldwin loses his MSNBC gig for calling an aggressive photographer a “fag”?

Why indeed? As the Oldman kerfuffle simmered, the increasingly unhinged Shia LaBeouf wound down an evening of misadventure by referring to his arresting officer as a “fag.” The reaction? Arbiter of cool Lena Dunham tweaked the flaky actor on Twitter, but didn”t call out his “homophobia.” (Dunham added with palpable glee that she was “sorry to contribute to celebrity takedown culture but this is the best current event we have!”)