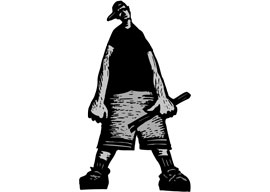 A small item in one of those free newspapers that end up on the seats of the world’s subway systems caught my attention yesterday. It was in the Paris MÃ©tro; I read it while sitting next to an old schizophrenic lady who was addressing her hallucinations with vehemence, while a female drug addict, who could have come straight out of Belsen were it not for the piercings through her eyebrow and right cheek, solicited alms from the rest of the not very understanding passengers.

The day before I arrived in France from Britain, I happened to read in the financial pages of one of the sceptered isle’s slightly more cerebral newspapers that, recent economic growth notwithstanding, the gross product of the British economy had not yet regained its level from immediately before the crisis struck. In other words, if one put the two things together, people in Britain were working more to produce less.

“More to be feared even than the secret sadist, however, is the person who genuinely believes in the intrinsic value and even indispensability of his absurd task.”

The British, and no doubt many others, are unable to distinguish between work and activity. This is not really surprising, since they call anything work if they would not do it without being paid. Whether this work, as they call it, but remunerated activity as I call it, contributes to the production of anything of value, economic or otherwise, is not a question for them. If they wouldn”t do it without payment, it’s work.

I realized a long time ago that a very large number of people in a modern economy are paid to do things that not only fail to add to the economic product of the country, but on the contrary reduce it, insofar as they obstruct others from producing as much as they otherwise might.

There is, as every petty official knows, a great deal of pleasure to be had from the obstruction of others, especially if they appear to be more fortunate, better placed, richer, or more intelligent than oneself. There is a pleasure in naysaying, all the greater if the naysayer is able to disguise from the victim the fact that he is not only doing his duty but gratifying himself. Indeed, there are many jobs, meaningless in themselves, in which the power to say no is the only non-monetary reward.

More to be feared even than the secret sadist, however, is the person who genuinely believes in the intrinsic value and even indispensability of his absurd task. He is as dangerous as any true believer. In my hospital, I saw many such people, scurrying like the White Rabbit in Alice from one meeting to another”meetings which medical staff were required to attend, thus diverting them from the main purpose of having medical staff in the first place. A friend of mine who had waited all day for a minor but potentially life-preserving operation was told at the last minute that his operation had been postponed because the surgeon had been called to attend a meeting. Only a credible threat by my friend of dire consequences for the hospital if the operation were not performed as planned diverted the surgeon from his pseudo- to his real work.

I am obliged by law to charge some of the publications for which I write Value Added Tax, which I then have to forward to the Treasury. The publications, however, are permitted to claim back from the Treasury the Value Added Tax with which they have been charged. No doubt most of this to-ing and fro-ing is done by computer, but it must involve some human labor, which clearly constitutes activity rather than work.

How many people, I wonder, are laboring hard to reduce the economic output of their country? In total it must be many millions.