The Haiti of Europe 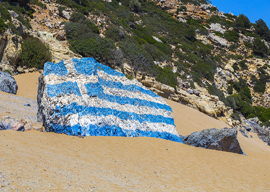 Greece is a small beautiful country in the southeastern part of Europe, a place of jasmine, bougainvillea, mimosa, cypresses, olive trees, pines, oregano, sage, and thyme; sand, rock, and the bluest and cleanest water on earth. It was the birthplace of (selective) democracy, philosophy, Attic tragedy, poetry, history, and, of course, tyranny. The most beautiful and symmetrical edifice ever constructed still stands in the sacred rock that is the Acropolis, and Greece is the country that first embraced the power of reason and persuasion and sought the embodiment of the “nous.” Ancient Athens, the capital of this small country, produced Pericles, the closest to a perfect leader any country has had since. Pericles believed in intelligence, reason, restraint, and peace. He was a soldier’s general who preferred to carry out his goals by diplomacy rather than war. He was an aristocrat, politician, imperialist, peacemaker, visionary, educator, private citizen, statesman, strategist, and hero. We know about him from sources such as Plutarch, Thucydides, and the comic poets. His death from the plague in 429 BC, during the Peloponnesian War, saw the end of Athens as a major power. And then there were the philosophers. Philosophy ended with the Greeks, no ifs or buts about it. The history of Greek philosophy is unlike anything else. One can understand the history of warfare without becoming Alexander the Great, Julius Caesar, or Napoleon. But one cannot understand Aristotle unless one becomes in a small way a Greek thinker. Ancient Athens was full of people who were philosophers. Philosophy was as popular as, say, rap is among the ignorant today, but as the Oracle of Delphi pronounced, “Socrates was the wisest of them all because he alone knew that he was ignorant.”

“We Greeks reached our peak 2,500 years ago, and it’s been downhill ever since.”

Having said all this, I imagine some of you may have guessed that I am Greek, and I am, with a dose of blue Danube blood in me. And I do have a confession to make: We Greeks reached our peak 2,500 years ago, and it’s been downhill ever since. Never mind. Greece has enough other problems pending to worry about what happened to its greatness. Greece’s financial position is terminal. It cannot hope to save, invest, and grow its way out of trouble. Like Germany following World War I, Greece has been choked by its obligations to foreign creditors. The archvillains are the megacrooks of the E.U. Children go hungry so that banks can tell their investors they’ve refused to take a haircut. The situation is similar to that of a fighter who is a middleweight, is put on a strict, starvation-like diet, and is expected to grow and fight as a heavyweight. Mind you, the Greeks themselves were the ones who started it. Once Greece joined the dictatorship that the fourth estate dares not call by its real name, the E.U., in 1980, credit became the cocaine of both left- and right-wing governments. The more the E.U. lent, the more successive Greek governments wanted and received from the dealer, Brussels, that knew from day one what was going on and, like all good drug dealers, let the addict sniff to its heart’s content.

Despite the BS put out by the various E.U. lackeys, as well as the extreme-left Greek government in power the past two years, Greece is more dependent than ever on the Troika (the ECB, IMF, and European Commission). Seven years of severe austerity with 60% unemployment of the young and 25% general unemployment have accomplished absolutely nothing. The country runs on its black economy. People have simply stopped working in order not to have to pay taxes they cannot afford to pay. When the austerity began in 2010, the debt was 130% of the GDP. Now it stands at 180%. The crooks in Brussels call it progress. Talk about Orwellian newspeak.

And now we come to the 64-dollar question: What is to be done? In a Greek newspaper article I wrote seven years ago I demanded the then government—whose prime minister I had once beaten 6–0, 6–0 in a tennis match, but had allowed him to post a much closer score after he begged for mercy (it illustrates his false pride and basic dishonesty)—leave the E.U. and tell them to shove it. Juncker would have bent over backwards fearing others might follow. We would have gone back to the world’s oldest currency, the drachma, paid off our debts by devaluing it, drawn even more tourists because of it, and given a lesson to Italy, Spain, and Portugal, who are fighting for their economic lives under the E.U. dictatorship.

Alas, not many listened to poor little Taki. The moral midgets who rule us love the motorcycle outriders and the false pomp that Brussels offers every two weeks during their interminable meetings and congresses. Greece chose to remain a member of the E.U. and the people have suffered ever since. No, not the rich, nor the very poor. The true strength of a nation, the middle class, has disappeared. Bureaucracy has continued unabated, blocking business decisions and business growth. The present radical left-wing party in power resists all reforms that could boost competitiveness. But the prime minister flies to Brussels regularly and meets with Juncker and has drinks and dinner. Poor Greece. It’s the Haiti of Europe.