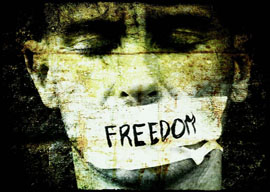 There isn’t a shred of evidence that deranged Tucson massacre suspect Jared Loughner ever listened to talk radio or cared about illegal immigration. Indeed, after 300 exhaustive interviews, the feds “remain stumped” about his motives, according to Tuesday’s Washington Post. But that hasn’t stopped a coalition of power-grabbing politicians, progressive activists and open-borders lobbyists from plying their quack cure for the American body politic: government-sponsored speech suppression.

This week’s fashionable new media meme is to deride talk radio hosts for taking these speech-squelching threats seriously. The Atlanta Journal-Constitution‘s Jay Bookman sneered at the “persecution complex” of conservative broadcasters who reacted to Slaughter and company. Politico’s Keach Hagey dismissed concerns about the Democrats’ chilling campaign against right-leaning media outlets and knocked conservative talkers’ “defensive posture.” (Sound familiar? This is the same tactic they used against Sarah Palin and all those on the right falsely accused of being accessories to the Tucson massacre: Attack ‘em. Attack ‘em for responding. Accuse the smear victims of playing the victim card. Repeat.)

“Nogales’ group is part of a larger “media justice” coalition dedicated to curtailing and redistributing conservatives’ political speech under the guise of diversity and decency.”

The head of the NHMC is Alex Nogales, who has filed more than 50 petitions to deny broadcast licenses and has led anti-corporate crusades to “force” broadcast stations across the country “to hire Latino reporters and anchors” and adopt “diversity initiatives.” Grabbing the Tucson shooting limelight, Nogales told Broadcasting and Cable magazine last week:

“We can’t stand there with our arms crossed and make like there isn’t a reason why this is happening. … We started this dialog(ue) in the last immigration debate four years ago. We could see that it was just out of control. It started with just an issue of immigration, then every pundit on radio and TV who wanted an audience started talking about it and started using the worst of language, and now it has spilled out into mainstream.”

Loughner’s wild Internet rants and creepy campus meltdowns clearly demonstrate that crazy doesn’t need a motive. But progressive censors need their bogeymen, and Nogales isn’t about to give them up for reality’s sake. The NHMC first filed a petition in October 2009 demanding that the FCC collect data, seek public comment and “explore options” for combating “hate speech” from staunch critics of illegal immigration. The petition followed on National Council of La Raza President Janet Murguia’s call for media outlets to keep immigration enforcement proponents off the airwaves “even if such censorship were a violation of First Amendment rights.”

Nogales’ group is part of a larger “media justice” coalition dedicated to curtailing and redistributing conservatives’ political speech under the guise of diversity and decency. As left-wing philanthropists at the Media Justice Fund put it: The movement “is grounded in the belief that social and economic justice will not be realized without the equitable redistribution and control of media and communication technologies.” But, hey, we better just ignore these communications control freaks lest we be accused of suffering a “persecution complex.”

The Praetorian Guards of civility keep telling us that “words matter.” Threats should be taken seriously, they insist. Except, of course, when those words and threats are uttered by those hell-bent on regulating their opponents’ discourse out of existence.