The Hate That the Hatred of Hate Speech Produced 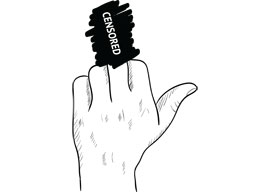 Apparently I was the only Canadian who wasn’t shocked when singer Steven Page was nicked for possessing cocaine back in 2011 (while in the company of a woman not his wife, to boot).

Barenaked Ladies are the country’s most wholesome, huggable band, but their lead singer’s creepy, cryogenic aloofness had always fairly screamed, “Stop me before I kill for the first time!”

Anyhow, Page has surprised me via the vehicle of his hoped-for redemption: a TV series called Illegal Eats, profiling food vendors who violate health and safety regulations: things such as “Korean cuisine sold directly from an elderly woman’s kitchen,” illegal feasts of wild game, and guerrilla “pop-up” supper clubs.

In a society that forbids children from even dreaming about peanut-butter sandwiches, in which the mayor of New York City polices your soft-drink consumption, I can’t quite believe Page’s show even got green-lit.

“All it takes is a small swarm of noisy, relentless troublemakers willing to shove bananas into the state’s exhaust pipe at their own risk.”

Or that he’s hosting it. Page is, naturally, an in-your-face socialist. Doesn’t he realize that his fellow “progressives” are behind the do-gooder micromanagement that’s rendered modern life so painfully constipated just because they think a hundred-year-old novel was a work of nonfiction?

Not only that, but presumably the first season’s thirteen episodes are in the can, all depicting chefs from Toronto to New Orleans matter-of-factly flouting numerous laws on camera. That’s no small thing in a heavily regulated hospitality industry where you can lose your life’s savings at some bureaucrat’s whim.

Bureaucrats like those at the European Union, which is entertaining a proposal to set up “surveillance units” within the Ministry of Justice to “monitor citizens…suspected of ‘intolerance.’”

Insists the “watchdog” group sponsoring this initiative, “There is no need to be tolerant to the intolerant, as far as freedom of expression is concerned.”

They’re calling for a sort of quantum law, the criminalization of “group libel” beyond even the boundaries of time and space: actionable slurs “may appear to be aimed at members of the group in a different…historical era or place.”

“Hate speech” will encompass the usual racism and homophobia, along with “anti-feminism” and”get this”“totalitarian ideologies.”

These irony-challenged human toothaches call themselves the “European Council on Tolerance and Reconciliation.” What’s frustrating about these damn foreigners is that even the good guys give their groups silly names: I was good and ready to mock “European Dignity Watch” until I read a little further and realized they were on my side.

Dignity Watch warns, rightly, that these “surveillance units” will employ a “reversal of the burden of proof” to incentivize “frivolous litigation” in the name of fighting “hate speech.” Every Canadian political junkie is laughing their ass off right now because we literally just got rid of this very setup.

It’s uncanny. You can’t spell “Frankenstein” without the “Stein,” and sure enough”just like in Canada”there’s even an “Official Jew” behind this latest sinister attempt to mandate “tolerance” and “diversity.”

Some Europeans reading about these latest totalitarian maneuvers will respond by moving their computer servers to “friendly” countries, hiding their IPs, posting their “hate speech” anonymously or, worse, not writing anything at all. They will dare to dream that one day, someone else will come along and rescue them from the censors and bullies.

These people will make everything worse.