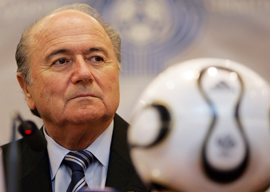 The greatest criminal and most profitable enterprise the world over is FIFA. I write this as billions are watching obscenely overpaid footballers competing for a cup that is long overdue for a total remake. It was a very good idea long ago, but so was selective democracy and waging war with bows and arrows.

Let’s take it from the top: The head gangster is Swiss and goes by the name of Sepp Blatter. Like his name, he’s straight out of central casting: fat, stumpy, bald, and rather vulgar. FIFA was founded in 1904 as a rule-making committee that regulated the relatively young sport of football, soccer in America, when played between nations. That was simple enough, and for a while, during those innocent pre-commercial times, it worked. Then the game got big, was played the world over, and commercialism reared its ugly head. Television billions poured into the game, and nations paid billions to build stadiums in order to stage the extravaganza.

“Football gives joy to people, especially the poor, but it’s the rich that are corrupting it and profiting from it. So what else is new?”

When Blatter took over as president in 1998, the so-called beautiful game was swimming in billions of dollars. Some of the stars were paid hundreds of thousands of greenbacks a week, and some so-called countries like Qatar”run as a fiefdom by a family called Thani, one that employed almost slave labor to modernize the sandy hellhole that it is”wanted in. Blatter was more than eager to oblige. FIFA’s executive committee is made up of delegates from African, Asian, South American, American, and European nations. FIFA’s officials were already under suspicion, especially the African ones, of taking bribes and of turning a blind eye to match fixing so gamblers could make a killing. Of 350 people who work full-time for FIFA, only six are involved in keeping the game on the straight and narrow. The corruption became obvious when four years ago FIFA awarded the 2022 world cup to Qatar, where summer temperatures exceed 130 degrees Fahrenheit and whose population consists of 250,000 Qataris and 1.4 million foreign workers-cum-slaves. The vote wasn”t even close. African delegates voted en masse for the sandy sight.

FIFA’s headquarters are in charming ZÃ¼rich, Switzerland, but soon the stench of corruption overwhelmed the pure alpine air. It became obvious the Thanis of Qatar had bribed the Africans to vote for them, but Blatter came up with a good defense. He called critics racists, then flew privately to Brazil and his glittering five-star hotel accommodations. So far so bad, but even in Brazil, not everyone was concentrating on football. The cost of holding the Cup has climbed to 15 billion dollars, and some ex-world stars were calling it “the biggest heist in the history of Brazil.” Back in good old Helvetia, the Swiss government began to ask questions about FIFA’s finances, as the organization avoids paying taxes while it rakes in billions. See what I mean by calling it the greatest criminal organization ever? The Mafia looks like a kindergarten lollipop scheme, not to mention Goldman Sachs.

Bribery, match fixing, a secret bidding process that chooses which country gets what: these are all FIFA’s achievements, and this stateless conglomerate discovered the key to success by holding up the Cup to various world leaders who wish to use the majesty of the competition for self-promotion. Some of them have nothing on the FÃ¼hrer and the 1936 Berlin Olympics. Mind you, football is the most popular sport in the world, and the poorest ragamuffin in the most horrible diseased-plagued African village can play it and does. Football gives joy to people, especially the poor, but it’s the rich that are corrupting it and profiting from it. So what else is new? Just before the World Cup opened in Brazil earlier this month, my old employer, London’s Sunday Times, helped break the story of a match-fixing syndicate and the referees involved. Most of them were from the Far East and Africa. It seems that South Africa’s 2010 world cup competition was rife with match fixing by crooked refs. Most of them were from impoverished countries.