The Helicopter’s Second Round

Ayn Rand wrote, “when you see corruption being rewarded and honesty becoming a self-sacrifice—you may know that your society is doomed.”

America is not yet doomed, but the fellows in Washington are pushing for that outcome. It seems that all the characters that encouraged this financial crisis are being rewarded, and Ben Bernanke’s re-nomination is no exception to this rule. He was on the Board of Governors when Alan Greenspan grew our bubble economy. Known as “Helicopter Ben,” Bernanke was the most vocal supporter of low interest rates to combat the bogus threat of deflation, even if it meant dropping cash from helicopters. He succeeded in his aim—as it is hard for prices to decline while the money supply is growing by double digits.

Of course, much of that new money went into speculative bubbles, first in tech and then real estate. When the misallocation became too great to ignore, the credit markets froze and leveraged institutions started failing. Now, Bernanke says that he doesn’t want to preside over another Great Depression. That doesn’t mean he doesn’t want another Great Depression; he just doesn’t want to preside over it. His plan seems to be continuing to print money so that the depression isn’t apparent until after he leaves office. However, while Greenspan was able to get out of Dodge, Bernanke will probably not be so lucky, as his reappointment virtually guarantees that he will be in the middle of the action when the bullets start to fly. Left to clean up his own mess, Bernanke will soon regret not quitting while the going was good.

Bernanke is being praised for avoiding a collapse in the financial system. While he has forestalled some short-term pain, he has in turn forsaken long-term gain. The ‘green shoots’ that set the pundits alight are nothing more than the direct effects of massive monetary expansion. What we have is nominal growth in the unproductive service and consumption sectors. In short, Bernanke is being praised by the drug addicts for not cutting them off. But the thing about addiction is that the longer you stay hooked, the more deadly the withdrawal. 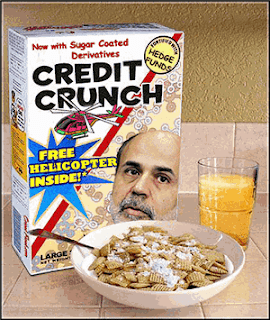 What this country needs is a Fed Chairman that is immensely unpopular, backed by a courageous President. Under Paul Volcker and Ronald Reagan, this model proved effective at avoiding a complete economic collapse in the early 1980’s. In case posterity’s resounding approval has clouded anyone’s memory, Volcker was vilified and threatened with impeachment at the height of that crisis. Reagan’s decision to stand behind Volcker allowed the Chairman to persevere. It has never been popular to be responsible. Only after the markets settled and the country experienced twenty years of prosperity was history’s final judgment made about Volcker.

Greenspan undid the painful sacrifice we made in 1981. He grew a bubble in tech stocks and then refused to allow the economy to restructure after it burst, instead inflating a real estate bubble in its stead. Meanwhile, federal spending ballooned, along with unfunded liabilities and guarantees that distorted the capital markets. The Fed created moral hazard because the government assumed that any excessive debt would be monetized. When push came to shove, Bernanke did exactly that, perhaps even hiding his intervention by buying Treasuries through intermediaries. In doing so, he allowed our elected officials to avoid making the politically costly decisions that would have prepared the country for future growth.

To get a sense of Bernanke’s ultimate legacy, look no further than Argentina. Though many of the rich and powerful had moved their savings abroad, a currency collapse wiped out the middle class in that historically prosperous country. Is such an outcome worth the short-term comfort of avoiding the severe but temporary pain of unemployment and mortgage defaults?

Bernanke’s re-nomination is a politically safe decision for President Obama, and at least Bernanke is a devil we know. However, this lack of a “change” for the better should squash any “hope” for a genuine recovery. If the Bush years were as bad as the Democrats claim, then it is curious that they are mimicking and magnifying the same mistakes. No one has been held accountable for a financial crisis that the professors, pundits, and politicians told us would not come. All the same players are running the game, always changing the rules so they stay on top. Real ‘change we can believe in’ would be a return to our roots in the rule of law and a system of sound money”but it’s hard to stay grounded when you’re throwing money from helicopters.