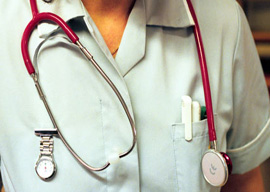 When questioning modern myths, one feels like Don Quixote charging the windmills. Nonetheless it’s time to demythologize the British National Health Service, which evidently serves as a model for some of President Obama’s more imprudent ideas. Britain does have a few things worth imitating, Mr. President, but the NHS isn’t one of them.

This gigantic organization has used every trick to create a saintly aura around itself. Many brainwashed Englishmen seem to honestly believe that using private medicine, even if it means salvation from misery or death, is an act of moral turpitude and treason. If medical care isn’t free, claim these sorely misguided individuals, poor people will be dying in the street like stray dogs.

But the term “free medical care” is mendacious. To a semantic rigorist, “free” used to mean something for which one didn’t have to pay. To NHS champions, it means something different. If pressed, they’d admit reluctantly that of course somebody has to pay for all those MRI and PET scans. Such things are expensive, and the more inefficiently they are provided, the dearer they get. If patients don’t pay for them directly, the payment comes from the government, which can only make money the old-fashioned way: from taxes or “quantitative easing” (“queasing” for short?).

“To a semantic rigorist, ‘free’ used to mean something for which one didn’t have to pay.”

Thus, “free medicine” really means that the transfer of money from patient to hospital is mediated by the state acting in the role of a megalomaniacal general contractor. But governments are less efficient, more cumbersome, and usually more corrupt than private enterprise. So we can assume that mastectomies will be more expensive when one pays for them through the government, whether one needs them or not, than they would be if one paid for them directly and only when needed.

But when today’s Englishmen pay for state medicine, they don’t only pay for mastectomies and scans. An ever-growing proportion of their money supports the mushrooming state bureaucracy administering “free” medical care, something for which we’d pay less if medical care weren’t “free.”

Yet the British don’t mind paying taxes, or at least they claim they don’t—just as Soviet people used to claim they didn’t mind donating, on pain of imprisonment, huge amounts to government bonds that never paid up. True enough, it’s a patriotic duty to pay taxes, but only to a government that pursues patriotic ends. Otherwise it’s our moral duty to avoid taxes as an act of civil disobedience.

Steady growth of nationalized medicine is tantamount to the state extorting ever-larger sums from the people. In the process, “free” medical care places an increasing proportion of the nation’s finances and labor force under state control, thus increasing the state’s power over the individual. The NHS already employs more than three times as many people as Europe’s largest private employer.