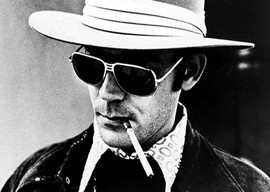 Writers traditionally bemoan how the movie industry fails to appreciate them. Yet there are more films about writers than there is demand from the paying public for motion pictures about individuals whose jobs involve sitting still and, every so often, scratching themselves. For instance, this week brought Anonymous, in which we learn that Shakespeare didn’t write Shakespeare, and next week imports Young Goethe in Love.

Hunter S. Thompson isn’t in quite the same league as Shakespeare and Goethe, but he did write one epochally hilarious book. The Rum Diary, a quasi-autobiographical novel about Thompson’s 1960 misadventures as the astrology and bowling correspondent for an English-language newspaper in Puerto Rico, isn’t, unfortunately, it.

Johnny Depp, who stars as the 23-year-old Thompson, claims to have discovered The Rum Diary‘s moldering manuscript at Thompson’s fortified compound outside Aspen while prepping for the 1998 adaptation of Fear and Loathing in Las Vegas and then talked the reluctant author into allowing publication. Depp’s implication that Thompson—who loved spending money on firearms, drugs, motorcycles, room service, explosives, knives, valet parking, and vicious animals—had passed up getting paid for his juvenilia out of aesthetic modesty doesn’t jibe well with his long decline in which he sold every thought that flitted across his short-circuited brain. Among major American writers, Thompson was rivaled only by Mark Twain, F. Scott Fitzgerald, and Tom Wolfe as a flaming materialist.

“Baby Boomers have a sappy habit of sentimentalizing their artistic heroes as selfless idealists motivated by liberal causes.”

Still, Thompson’s life had a less depressing first act during which he perfected his highly original comic prose style of extreme rhetorical violence which had an impact on contemporary writers comparable to Twain’s or H. L. Mencken’s in their own eras. Thus, The Rum Diary serves as a prequel to Fear and Loathing, showing the budding journalist first encountering various Thompsonian tropes such as Nixon hatred, overweight drug buddies, and LSD. (Most biopics of sixties artists depict drugs as “inner demons,” but novel brain chemicals played a crucial role in novel styles.)

Still, The Rum Diary suffers from a problem that Thompson masked in Fear and Loathing with the brilliance of his peak prose: Nothing much happens. While reading Thompson’s masterpiece for the fourth time, I realized that I may have walked past Thompson at his main Vegas hangout, Casino Casino, amid his Fear and Loathing escapades in April 1971. Surely, though, I would have noticed the commotion inevitably generated by this notorious wild man?

Actually, no. When I reread Fear and Loathing while paying attention to the action rather than merely savoring the invective, the story turned out to be largely Thompson’s paranoid fretting over whether he and his drugged-up 300-lb. Samoan attorney will be able to deal with hotel desk clerks and parking attendants, few of whom notice anything amiss.