The Holy Roman Church of Football 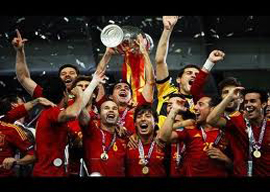 Yet again, a Catholic country has won a major international soccer tournament. Why are Catholics so good at kicking around soccer balls but so bad at running their countries? Is it because they are Catholics?

The country Spain defeated 4-nil in last Sunday’s final, Italy, is also Catholic. Italy won the World Cup in 1934 and 1938 and the gold medal for soccer at the 1936 Berlin Olympic Games in between.

Meanwhile, the Italian and Spanish economies, as well as those of all other Catholic countries in the eurozone, move inexorably closer to total meltdown.

The Protestant British may have invented “the beautiful game,” but the Catholics are much better at it.

Starting in 1930, there have been 19 World Cup tournaments, but only eight countries have won. Of these, Catholic Brazil has won the World Cup the most times (five), followed by Catholic Italy (four). Germany has won three times despite being an extremely well-run country with a highly efficient economy. But roughly one-third of Germans are Catholics, as is the current Pope. Catholic Uruguay and Catholic Argentina each won twice. France won once, but over half of the French are Catholics. So the only properly non-Catholic country ever to win the World Cup was England in 1966.

“Why are Catholics so good at kicking around soccer balls but so bad at running their countries?”

During last Sunday’s final there was a funereal silence on the deserted streets of ForlÃ¬, the small Italian city where I live, as a result of Italy’s crushing defeat by Spain.

At home in front of the television in the kitchen, as your typical downtrodden Englishman living in the midst of so many Italians, I was secretly supporting Italy’s opponents as ever. My five small children on the other hand, all born in Italy and baptized into the Catholic Church, were rooting for Italy as if it were the most normal thing in the world to do”as was their mother, my Italian wife Carla.

But Italy had done very well. They beat Germany in the semifinal. Germany’s refusal to shoulder the entire debt burden of the eurozone’s Catholic countries, plus that of Orthodox (semi-Catholic) Greece meant that its defeat was greeted with euphoric applause across the continent.

And Italy lost in the final not because the Spanish were so much better but because that triumph against the Germans had left them fatally exhausted and overconfident. But at least Italy had lost to another Catholic country, Spain.

Whereas Karl Marx regarded economics as society’s driving force, Max Weber saw religion as more important. He argued in 1905’s The Protestant Ethic and the Spirit of Capitalism that there was a causal connection between Protestantism, especially Calvinism, and capitalism’s rise and that this explained why the Industrial Revolution took place in the Protestant, not Catholic, countries of Europe.