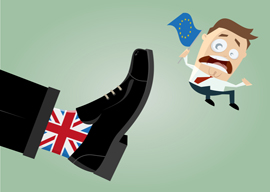 I haven”t actually made up my mind about this whole Brexit thing.

The British will vote in a referendum on whether to leave the European Union on June 23, but the debate has gotten bogged down because of the limits on respectable opinion. The two allowable views are that Britain should leave because other Europeans are hateful, or that Europe should stay united so it can let in more non-Europeans.

The notion that Europeans might favor each other over outsiders (its founding idea) is today unthinkably racist.

Yet the main problems driving support for Britain exiting are immigration and the English fear that the EU is increasingly a mask for German mastery, hand in glove with Germany’s Great War ally Turkey.

But you aren”t supposed to talk about such matters.

There’s some evidence that David Cameron’s government has been cutting back on the Pakistani influx after decades of immigration abuse, such as arranged cousin marriages, but it’s hard to find real news.

The latest brouhaha involves former London mayor and potential Tory prime minister Boris Johnson, the de facto leader of the Leave campaign, mentioning the H-word in connection with the EU:

“The truth is that the history of the last couple of thousand years has been broadly repeated attempts by various people or institutions”in a Freudian way”to rediscover the lost childhood of Europe, this golden age of peace and prosperity under the Romans, by trying to unify it. Napoleon, Hitler, various people tried this out, and it ends tragically.”

This outraged Remain supporters, since everybody knows the EU is good and Hitler is bad.

Granted, that’s a pretty childish way to think, but the debate over the European Union hasn”t shown much sophistication. Nor has it been terribly relevant to the real issue of the 21st century, which is that Europe will be demographically overwhelmed if it doesn”t develop the self-respect to defend itself.

John Cleese of Monty Python observed in 2011, “London is no longer an English city.” And as you may have heard, Boris has been succeeded as mayor of London by Sadiq Khan. (His election as a moderate Muslim, the anti-Trump, has been greeted with the same rapture in the press as the fictional Muslim French president, Mohammed Ben Abbes, in Michel Houellebecq’s novel Submission.)

Contra Boris, you might imagine that British voters would be more concerned about England filling up with Pakistanis than with Poles. After all, Poland might actually improve enough for the Poles to want to go home someday, while nobody expects the Pakistanis to ever make much of Pakistan. And Poles tend to go into plumbing rather than pimping.

But British subjects are allowed to express their opinions of Poles, while speaking freely about Pakistanis can bring a visit from the police.

Of course, Boris” reference to “Napoleon, Hitler” is a shout-out to the single most consistent foreign policy objective of London over the past half millennium: preventing any single hegemon from dominating the Continent, especially the Low Countries across from the Thames Estuary.

The Rhine and other rivers that empty into the English Channel provide easy access for the manufactures of the offshore islanders to the cities of Western Europe, while allowing political independence. It’s a sweet deal: England has enjoyed perhaps the most advantageous geography in the Old World over the past nine centuries and thus has traditionally molded its foreign policy to preserve and maximize the advantages of it being just barely out of reach of Continental powers.

Since the time of King Henry VIII, the English government worked for a “balance of power“ (i.e., undermining Continental unity). England supported the second-strongest power on the Continent against the strongest. Thus, London backed Prussia against France during the Seven Years War” of the mid”18th century and West Germany against the Soviet Union during the Cold War.

The English won most of these power struggles, which is why I”m writing this essay in distant California in English.

Whether or not the English preoccupation was good for the Continent is a different question. As John Keegan pointed out in his classic book The Face of Battle, England’s most famous battles, such as Agincourt, Waterloo, and the Somme, have been fought in the lowlands of northwestern Europe rather than in England. This has made the conduct of foreign policy rather more fun for the English than for everybody else. From the mainland perspective, perhaps the English have enjoyed the piratical advantage of picking and choosing their fights to maximize European disruption. (But then the victors have written most of the histories, so this viewpoint is little known in America.)

Another paradox of European Union politics is that Europe’s national leaders don”t actually have to obey the EU, as Ms. Merkel demonstrated last summer in tearing up the Dublin regulations on refugees. (Stalin might have said, “The EU! How many divisions has it got?”) As long as national rulers can spin their whims as upholding “European values,” they can use the EU to amplify their power.

Who is the most plausible would-be Continental hegemon to elicit this instinctual English reaction to practice divide-and-disrupt?

The White House encourages Brits to worry about Vladimir Putin, but Russia is far away and still relatively dilapidated. Putin’s neo-czarism is reassuring to Russians, but offers little to attract people in the more historically fortunate lands of Western Europe.

In reality, the biggest threat to European unity is its dominant figure, Dr. Merkel.