The Impermanence of Labels 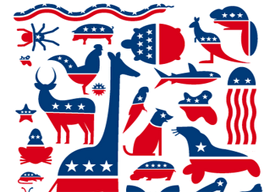 George Will recently complained about the “cognitive dissonance” characteristic of our ideological self-descriptions. According to Will, “Twice as many Americans identify themselves as conservative as opposed to liberal,” but many of them vote differently from the way they describe themselves. They lean theoretically toward Thomas Jefferson, who advocated limited government, but they vote like disciples of Alexander Hamilton, who favored a strong federal state.

Will quotes Senator Daniel Patrick Moynihan, who complained about the difference between how Americans think and how they vote. Moynihan said Americans are mostly “conservative,” but this is merely a “civic religion” that is “avowed but not constraining.” Moynihan voted almost always with the left on social issues. He was a favorite of Will and of Will’s neoconservative colleagues because of his pro-Israeli stands (Moynihan represented New York City) and his activist, ideologically charged foreign policy.

“It is foolish to paste dusty political labels from the past onto a drastically different political present.”

What Will has written about political labels is pure mush. He stretches the term “conservative” so far that it means whatever he (and presumably the “conservative” press) wants it to mean. Judging by polls, the majority of Americans stand well to the left on social issues of where the American left and even the European far left used to stand. By modern standards, European communist parties well into the post-World War II era were strikingly reactionary about gender roles, Third World immigration, and gay rights”and certainly in comparison to how most American voters think about such questions now.

Those who were ranting at the GOP Convention about our duty to spread human rights globally did not sound even vaguely “conservative.” They seemed to be imitating the zealots of the French Revolution who worked to bring their “Rights of Men and Citizens” at bayonet point to the rest of the human race.

It is even more ridiculous to treat American Democrats as “Hamiltonians.” In the late eighteenth century, being in favor of a strong nation state was not a leftist position. It was identified with mercantile power. In Hamilton’s case, it was linked to distrust of mass democracy and the French Revolution’s internationalism. The supposedly prototypical Obamaites who supported Hamilton were often favorable to such ideas as turning the Senate into something like the British House of Lords, establishing a national church, and raising George Washington to the equivalent of the British monarch. There is boundless stupidity in comparing modern-day Democrats to eighteenth-century Hamiltonian conservatives.