The Importance of Being Guilty 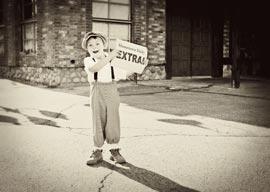 Self-blame is no doubt salutary when one is truly blameworthy, but there is also a kind of self-blame that is exaggerated, insincere, grandiose, and exhibitionistic. It is also abstract and collective rather than individual; it is the kind of self-blame that intellectuals specialize in expressing on others” behalf and which requires no painful or difficult personal reform or change.

Whenever anything terrible happens, or rather is done, in the world, “we” are somehow to blame for it, not the merely apparent perpetrators. The root cause is always in us, the us in question being our biological, cultural, or political ancestors, but never me in particular. We are responsible, but I am not. We have done something to make them behave badly, and if it were not for us the world would be a peaceful, happy place. And to be ultimately responsible for all the evil in the world is at least flattering to one’s sense of self-importance, the defense of which motivates an important part of many people’s intellectual activity.

The kind of guilt I have described is designed to demonstrate the superior moral sensibility of those who express it. “I am not like the mass,” that person tells himself, “who see only appearances. I, by contrast, make no hasty censorious judgments and suffer no vulgar prejudices, and see through to the moral reality of things with my gimlet or X-ray intellect.” And in the process, he displays his superiority for others of like mind to see and approve; for they are the Brahmin caste of moral philosophy to which he wants to belong.

“The kind of guilt I have described is designed to demonstrate the superior moral sensibility of those who express it.”

Such, at any rate, were my thoughts when I happened on an article in the Guardian newspaper shortly after the identity of Jihadi John, the man from South London who palpably enjoys beheading people in the desert, had been revealed. I noticed the article because of its headline:

To tackle extremism we need first to understand racism.

I felt a frisson of outrage course through my body, always a delightful and gratifying sensation. The article was written by a repentant fanatic, Maajid Nawaz, and the standfirst went as follows:

Like “Jihadi John,” I was radicalised in my youth. So I know grievances can be exploited if they”re ignored.

It turned out”to my slight disappointment, I must admit”that the article, though not well written or constructed, was far more reasonable than the headline and standfirst suggested: in fact those were outright misleading as to the article’s drift. For the author says, admittedly in a rather convoluted way that suggests a too-lengthy frequentation of the halls and corridors of British universities, that the problem with Islamism is Islamism. Its ideas are vicious and worthless, and must be exposed as such. (The author steers delicately away from the question as to how far those ideas are inherent in the religion itself.) He says, splitting his infinitive:

It is disingenuous for many Muslims and others to solely criticise foreign policy grievances without also openly debunking Islamist ideology in its peaceful or violent manifestations.

Fall short of this [criticism] and we become nothing but tools in the hands of ideological propagandists who will use our voices to further the victimhood narrative, just as racists do when talking about immigration.

Ill-written as this is, it cannot possibly be construed to support the standfirst’s statement that “grievances can be exploited if they”re ignored,” for the author is specifically saying that it is not the existence of grievances that explains Islamism: a point of view amply borne out by what we know so far of Jihadi John, who had a university degree in information technology and could presumably have had a perfectly decent and prosperous career, if such had not been too small and contemptible a thing for his grossly inflated and narcissistic ego.