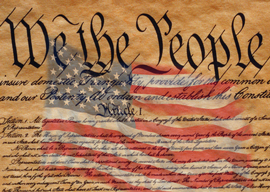 Soon after Barack Obama’s November 20th amnesty announcement, I was having an e-discussion about it with a friend, a legal scholar. The precise topic of the discussion was the Los Angeles Times op-ed on citizenship by Peter Schuck, a different legal scholar.

The 14th Amendment doesn”t directly address their status (there was no illegal immigration in 1868). Nor has the court ever squarely held that such children are birthright citizens, although this is the common practice …

Many Americans believe that granting these children citizenship defies consensualism because the parents are here in violation of laws passed by our representatives. Nonetheless, legislation to change the situation never gets very far, probably because doing so would raise complications in a nation of immigrants with so many mixed-status families.

I registered my impression that Prof. Schuck’s piece was lackluster (he favors amnesty) and didn”t address the main issue with birthright citizenship, viz.: What’s in it for us other American citizens?

“Senile decline has come upon us fast, I”ll allow. A mere half-century ago we could still do things”at any rate, technological things like moon landings.”

I think that withdrawing birthright citizenship from the children of illegals would be a good move, and highly appropriate. I don”t see why we couldn”t do it going forward. But of course we won”t, because we can”t do anything.

It was that closing phrase that stuck in my mind. We can”t do anything. It’s so damn true.

A few days later I was watching a video clip of looters trashing a convenience store in Ferguson, Missouri following the November 24th grand jury decision in the Michael Brown shooting.

The looters were described as “protesters” by Sean Hannity’s voice-over, but that seems to me a bit unfair. There were genuine protesters out there in the streets that night, genuinely indignant about the decision. Personally I think they”re deluded; but they have a right to their stupid opinion, and a right to peacefully protest. Many of them, perhaps a majority, were not looting.

If we are to keep our civic freedoms, the public authorities should be able to perform one of their proper functions, permitting peaceful protest, without abandoning another one, the safeguarding of citizens” property against mobs and those who incite them. Do we not know how to do this? We have a couple of centuries” experience of law enforcement. It’s taught to postgraduate level in our colleges. How hard can it be? Yet we can”t do it. We can”t do anything.

Those images of looters were still in my mind on the 29th when my copy of The Economist arrived. It contained a melancholy article about the condition of Afghanistan as the NATO intervention ends.

With its promises of prosperity and gender equality, the reconstruction effort always appeared in pursuit of the unattainable …  Output is expected to grow by 1.5 percent this year, less than the population …  Even NATO analysts, who are considered optimistic, admit the Taliban have never been stronger …  In the absence of a functioning state, illegal drugs, timber, and other rackets have flourished under a Jihadist-themed cover.

So the 13 years of Western intervention were all a waste of time, then. Also of money (“estimated at a trillion dollars, or $30,000 for every Afghan”) and lives (3,481 coalition fatalities). We passed over Afghanistan like a shadow, hardly leaving a footprint. When we are gone, all will be as it was before.

Why was defeating the Taliban not possible?

Their leadership is headquartered in Pakistan, which makes them unconquerable.

Because, I guess, Pakistan is such a formidable military and economic power, it would be foolish for the combined forces of the entire Western world to engage them.

It seems to me there was nothing there that couldn”t have been taken care of by a handful of well-placed thermonuclear bombs, but of course we can”t do that. We can”t do anything.

“If youth only knew: if age only could,” say the French. Darn right. When you”re young you”ll tackle anything. Every experience is a first fine careless rapture. With age comes hesitation, then passivity, then incapacity.