The Inalienable Right to Hate Fags 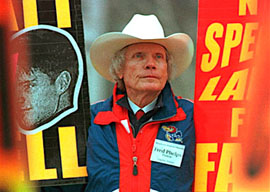 Based on their entertainment value alone, I believe that the Phelps family of Topeka’s Westboro Baptist Church deserves First Amendment protection. For entirely different reasons, the US Supreme Court agreed that these loud, kooky, and possibly inbred fag-bashers deserve such protection, too. In a surprisingly lopsided 8-1 vote, the court ruled last Wednesday that the Phelps clan was safely swaddled within the Bill of Rights for picketing near a dead soldier’s funeral in March 2006.

I first encountered the pathologically fag-obsessed Reverend Fred Phelps”family patriarch and doddering pastor of a church comprising 80 or so sheep, almost all of them sheared from his loins”on a Jane Whitney Show appearance sometime around 1992. Watching the craggy Rev. Phelps punctuate every other sentence with the word FAG as if it were a bullet and seeing him bellow something like, “Jane, you warned me there”d be some FAGS in the audience, but you didn”t tell me they’s all gonna be FAGS””was the funniest TV experience I”d had in a coon’s age.

And it had nothing to do with hating fags, just as finding the Black Israelites funny had nothing to do with hating white people. In a culture obsessed with “hate speech,” the real deal always seems disappointingly hard to find. FINALLY someone comes along filled to his salty gills with real, throbbing, vibrating, obsessive, borderline-psychotic hatred saying the things that aren”t supposed to be said in a way you couldn”t have imagined someone would ever conceive of saying them”all with such unabashed gusto, you”d think they were auditioning for a beer commercial. I enjoyed it.

I feel sorry for you if you aren”t entertained by people who say things such as Jews “hate God and worship the rectum,” the Catholic Church is “the largest, most well-funded and organized pedophile group in the history of man,” and that “Mohammed was a demon-possessed whoremonger and pedophile who contrived a 300-page work of Satanic fiction.” I find it so funny, I paused to laugh while typing it. If you can make it from 2:35-3:20 of this video without so much as a titter, I”ll pray to the Lord to give you a funny bone.

And don”t go getting all New Age and holy about how Phelps isn”t practicing “true” Christianity, at least when it comes to the homos. You bet your sodomized ASS he’s preachin” God’s word. The Bible explicitly condemns homosexuality despite progressive revisionists“ pathetic attempts to say it doesn”t. If you”re a Christian or a Jew, you worship a God who incinerated Sodom and Gomorrah because they were faggin” off something awful. And if you think the Westboro Baptists are the biggest fag-bashers on Earth, you don”t know much about Muslims, little buddy.

Based on their endless words and their tireless actions, the Westboro Baptist Church seems to sincerely believe that God is punishing America for its increasing tolerance of homosexuality. They honestly seem to think that every scrawny AIDS casualty, every soldier snuffed in battle, and every random bleeding disaster victim is tasting “God’s hate” in the way that only a sadistic, torture-happy God can spoon it out to them. The sort of drive that compels this extended family of look-alikes and think-alikes to conduct an average of a half-dozen public demonstrations every day for nigh on two decades suggests they truly believe in what they do, regardless of whether people think they”re assholes.

Now, paint me pink and call me Shirley, but they are assholes of a rare caliber. Picketing the funerals of AIDS victims and slain soldiers is mortally rude. Picketing at any funeral for any reason makes you an asshole. In fact, picketing at all, even once in your life, is a good indicator that you”ve always been and will always be an asshole.