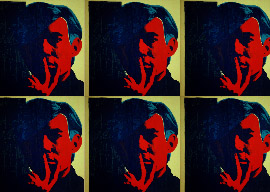 Donald Trump is strikingly unaffected by the ideological indoctrination that has otherwise overwhelmed the thinking of American elites. Why?

Consider the candidate’s attitude toward modern art as an analogy.

Some of our current political craziness reminds me of modern art…. Back in the day, the rich could easily demonstrate their superiority: they might have a Vermeer on the wall, but you didn”t. They had a chamber orchestra”you didn”t. But with cheap replication, anyone can afford a Vermeer print, anyone can buy the music they want for a song. In such a situation, you pick a marker that nobody really likes: one that marks you as different and special…. Modern art instead of Rembrandts.

We live in an era when billionaires seem compelled to buy artworks that few would like unless they had been apprised of the theory. Tom Wolfe pointed out in his 1975 history of modern art, The Painted Word, that the great creative talents of the New York art world were less the painters of the era”Pollock, de Kooning, and Warhol”than the critics”Greenberg, Rosenberg, and Steinberg”who had come up with the verbal justifications for why the paintings were worth a lot of money.

“Trump’s just not verbally adept enough to put over the kind of high-status bilge that has colonized our thoughts.”

But complex theories seldom appeal to Trump, who noted in Trump: The Art of the Deal:

I”ve always felt that a lot of modern art is a con, and that the most successful painters are often better salesmen and promoters than they are artists.

Not surprisingly, the one famous artist Trump was somewhat in tune with was deadpan jokester Andy Warhol, a fellow expert at self-branding. Warhol liked to say, “Art is what you can get away with.”

The money-loving painter was so excited in 1981 upon meeting Trump that even without a commission Warhol painted eight pictures of Trump Tower to hang in Trump Tower.

But then Trump didn”t buy any of his offerings because Warhol’s spec paintings didn”t match the Trump Tower’s color scheme. The wounded Warhol nursed a grudge against Trump for not giving him any money, but the tycoon never seemed to notice what was going on behind the artist’s famously flat affect.

Today, Trump doesn”t bother to read up on the intricate reasons he ought to buy, say, Damien Hirst’s diamond-encrusted skull sculpture For the Love of God for $100 million like an ordinary, decent plutocrat would who respects the values of his age.

Trump instead would rather buy an ocean-cliff golf course because it’s beautiful. He”d tell you that Hirst’s skullpture is ugly.

Which it is. But that’s not the point. The point is that you are supposed to act like you understand and care about the theory of why you should buy an ugly work of art to show you get the joke and other people don”t.

Cochran explains that in an age of abundance among the wealthy, the intellectual equivalents of Damien Hirst sculptures are likewise popular:

You adopt political ideas that are obviously stupid”because only a truly refined person can understand their subtle justifications…. Any lout might think that race exists and partly explains what people are like”only a sophisticate could steadfastly deny his lying eyes.

While Turks believe that he who can improvise the most convoluted conspiracy theory (some of which turn out to be bizarrely true) has proved himself the smartest guy in the room, affluent Americans take pride in their honed ability to smoothly articulate the inane rationalizations required to obscure our blatant social realities. When individuals routinely have their careers wrecked for letting slip truths, nimble glibness is admired.

Yet Trump has survived with strikingly little verbal slipperiness at his command. His braggadocio is transparent and his style is, at best, on the nose. (The press has had much fun this week with Trump’s complaint about The New York Times, “They don”t know how to write good.”)

Therefore, it has come as a recurrent shock to the press that a man who doesn”t seem even conventionally gifted in English has liberated for democratic consideration so many forbidden ideas.

How did that happen?