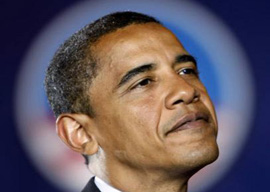 From Bono the rock star to Bozo the clown, Obama is polling lower than the teats on a pregnant weenie dog. Obama has been relegated to speaking at high schools and fire stations.

His recent bus tour arrived at the first stop in the formerly red-turned-blue state of North Carolina, where Obama was greeted by nearly 200 adoring fans. Michelle travels with a larger entourage than this.

Subtract the “undisclosed number” of Secret Service agents, plainclothes operatives, various man-servants, then add in local law enforcement, paid union members, and Central Casting extras, and you get about 12 people who actually caught Obama’s act at any given location on the tour. Why didn’t he just Skype the tour from his CrackBerry?

What happened to the sold-out venues, the fawning “Obama Girls,” and other regressive Utopians who felt that Obama would make heaven of Earth? The gilded crowd is vacationing in St. Mortiz, while others take “staycations” to dig their 2012 sub-Utopian rat holes.

Most conservatives knew that Obama’s fall was coming, and I feel a sense of déjà vu telling you what I reported a few months back, that Obama’s crowds have been shrinking like post-lactation breasts.

“Obama’s dismal performance has most Americans more broke than the Ten Commandments.”

As this tour proves, Obama’s audiences continue to shrink, not drawing enough of a crowd to throw a decent backyard barbecue or a beer fest. Don’t be surprised if the White House offers incentives (such as SNAP cards) as party favors to pull in a few more zombies.

Obama’s dismal performance has most Americans more broke than the Ten Commandments. Incomes are down dramatically—the most in decades—and that’s for the lucky few who are fortunate to have jobs. Gasoline is a luxury item for those who haven’t hocked their cars to pay for their food and medicine.

For college kids, the old “look to the left, look to the right” no longer is about who will be in your graduating class, but more likely indicates who won’t have jobs when they graduate.

Things are so bad for Obama that even after breaking his so-called jobs plan into “bite-sized pieces” that Republicans can understand, the Democrat-controlled Senate passed on the appetizer.