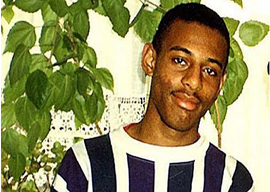 The Macpherson Report on the police investigation of the 1993 murder of black teenager Stephen Lawrence was published in London in January 1999. Ten years on, it is continuing to have major repercussions for British jurisprudence and society.

Around 10.30 p.m. on 22 April 1993, 19-year-old Stephen Lawrence was standing with a friend at a bus stop in the London suburb of Eltham. A minute or two later, he was lying where he had collapsed after fleeing five assailants, one or more of whom had stabbed him in the chest and arm, severing major arteries. Because one of the assailants had shouted “What? What, nigger?” during the unprovoked attack, it was naturally assumed that his murder had been racially motivated.

Five white men were arrested and two were charged, but there was insufficient evidence and the case was abandoned. Three years later, Stephen’s family initiated a private prosecution against the five men. The trial was held in the largely Afro-Caribbean suburb of Elephant and Castle, with dozens of Black Muslims lining up outside the court to intimidate and assault the accused. The five refused to answer questions, as was their legal right; the case against the original two men had been dropped prior to the trial, and the judge at the trial acquitted the remaining suspects after finding that identification evidence was inadmissible.

The disappointing verdict turned an already disagreeable situation into something extraordinarily noxious. It had long been darkly hinted by radicals that British society was riddled with virulent racism, and that the Metropolitan Police simply did not care about crimes against black people. Blacks and police had often clashed violently in the past, most notoriously at Brixton, Toxteth and Broadwater Farm (PC Keith Blakelock was killed by a mob at the latter event, eliciting the infamous remark by black Labour MP Bernie Grant that “the police got a bloody good hiding”). Now, their inability to find (or convict) the killers was for many conclusive proof of police racism. That the suspects were obviously deeply unpleasant”inadmissible video evidence showed them joking about stabbing people, and two have subsequently been convicted for a racially-aggravated attack on another black man”made it very difficult for many to understand why nothing was being done.

Irresponsible media fed the flames gleefully. Contemporary newspaper headlines included “The Face of Hate,” showing the suspects lashing out at (unpictured) Black Muslims during what must have been a terrifying approach to the magistrate’s court; “Eltham”Scene Of The Crime, Streets Where Race Hatred is the Norm,” in which the mostly middle class suburb with its attractive medieval palace was portrayed as a kind of mini-Belsen; and “Murderers: The Mail accuses these men of killing. If we are wrong, let them sue us.” The attitude of the Daily Mail, a downmarket conservative paper, was curiously aggressive”curious, because the Mail at that time was being criticized for supposedly racist reportage.

The incoming Labour government set up a special committee under the chairmanship of Sir William Macpherson, a retired judge and Conservative-voting Scottish aristocrat. Sir William was hopelessly out of his depth, and was outgunned by the other committee members”Ugandan-born John Sentamu (who has now miraculously metamorphosed into the Archbishop of York), Richard Stone, the then chairman of the Jewish Council for Racial Equality, and one Tom Cook, who listed “educating children in anti-racism” as one of his “particular concerns.”

It was unsurprising that the eventual report not only blasted the police for incompetence (deservedly), but averred that the force was “institutionally racist””the first time that Stokely Carmichael’s tendentious terminology had been recognised as an objective term in a UK government publication. There was, the report averred, a “canteen culture” of racism in the police. Not only the police, but the judicial system, the National Health Service, schools, local government and civil service were all deemed prone to such racism. Macpherson made a total of 70 recommendations, a few so ambitious that the government distanced itself rapidly from them”including abolishing the ancient safeguard of “double jeopardy” (which provided that suspects could not be tried twice for the same crime using the same evidence”although this provision was subsequently watered down in 2003) and criminalizing “racist” statements made in private. Others were adopted”such as the recommendation that any crime perceived by its victim or a witness to have been a racist crime should be regarded as such thenceforth and fast-tracked. Many of the other recommendations, such as amending the National Curriculum to “value cultural diversity,” were already de facto policy.

Many criticised Macpherson’s conclusions and called him a fool”he admitted later to being “deeply wounded” by the vitriol. But he had released the bacillus, and the infinitely extendable concept of “institutional racism” has become part of Britain’s cultural wallpaper. It has been used to assail every institution from the Royal Family and the Church of England down to even the Labour Party, every profession and area of society. Now and for the foreseeable future, everything that makes Britain what it is lies under the subliminal suspicion of being attainted with injustice or rank hatred, and is increasingly subject to censure and interference by government.

The penitential, neurotic tone was set by a senior London policeman, John Grieve, when he wrote a 1984-style “confession in the Daily Telegraph“”I am a racist. I must be because Sir William Macpherson of Cluny said that I am…I”ve found inside myself evidence of subtle prejudice, preconception and indirect discrimination. I”m for change inside myself and in the behaviour of others”

Initiatives were announced to attract ethnic minorities into the police, with ambitious “targets” (which the government maintains are not quotas). These targets have proved unworkable across the police and all other institutions and professions, and are a constant cause of angst, backbiting, distrust, expense and acrimonious legal proceedings.
The report’s immediate effect was to make policing more difficult, by exacerbating existing distrust between blacks and the police”and these effects linger a decade on. There has been a steady demoralization and departure of experienced officers who are declining to sign back on when their contracts expire, and an upsurge in long term sick leave. There has been a huge rise in gun and knife crime essentially because police are reluctant to stop and search black youths. Macpherson underlies the allegations made by ethnic minority police officers who have experienced career obstacles. “Institutional racism” has migrated into the public consciousness and academic publications, from where it will exercise its eldritch power for decades to come.

There continue to be case-specific echoes”the police paid Stephen’s friend £100,000 compensation in 2006. Allegations of corruption against the officers concerned were investigated (they were exonerated). In 2007, a Stephen Lawrence Prize was introduced for ethnic minority architects. In 2008, a Stephen Lawrence Centre was opened in southeast London, and was promptly vandalized (the automatic suspicion that the vandalism was racially motivated was scotched by CCTV footage). There are spasmodic TV documentaries, plays and articles, and reports of “new evidence” which never amount to anything. Like Steve Biko, Stephen has passed into national mythology as a perennially young, illimitably poignant symbol of black grievance against “The Man””an inappropriate and melancholy fate for a pleasant young man who was, his mother said, uninterested in race (“all he saw was the person”).

Macpherson‘s 10th anniversary was marked on 19 January with a much-reported speech by Trevor Phillips, the Guyana-born “chair” of the Commission for Equalities and Human Rights, a body paid £70m annually by Whitehall to centralize Labour’s cosmic battle against the “forces of conservatism.” Phillips has forged a lucrative career out of race relations. His present salary is £110,000 per annum, and he runs a consultancy that controversially makes money out of high-profile race cases. He is an ex-president of the National Students Union, ex-chairman of the Commission for Racial Equality, a friend of Peter Mandelson and Tony Blair, and a holder of the LÃ©gion d”Honneur who famously used to keep a bust of Lenin on his CRE desk”despite a series of inflammatory gaffes for which he has had to apologise.

But his rhetoric has now become more nuanced, even if the underlying motivations and effects remain the same. He has become an opponent of the multiculturalism he once so enthusiastically promoted”thereby being accused by Ken Livingstone of “pandering to the right” so much he would “soon join the BNP.”

In his 19 January speech, Phillips praised the police for the “progress” they had made since 1999, and said that he now favoured forgetting “institutional racism”””The use of the term was incendiary. It rocked the foundations of the police service and caused widespread anguish in government.” But “I am not saying that institutional racism … has been obliterated … Public institutions are not now exonerated with a single sweep. Our mission has not been achieved.” For example, parliament remains outrageously “white, straight and male.” There was still “systemic bias” and a need for a “national debate on equality.” Now there’s a radical idea”and one that will keep Mr Phillips enjoyably busy for many years to come.

Derek Turner is the editor of the Quarterly Review.