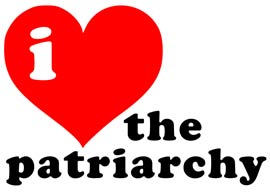 We are told, often with ill intent, that we live in a patriarchal culture. Our schoolteachers, who always seem to be female, lecture us that males enjoy unfair privileges merely for being born with an “outie” rather than an “innie.”

For all the gum-flapping that these dizzy broads do about male privilege and the brute emotional coldness of the entire male gender, they’re either blind or indifferent to the multifarious ways that women enjoy tremendous societal advantages. And on the rare occasion when they concede that men are able to experience any emotional pain whatsoever, it is usually to mock them for it. Amid all this balderdash and poppycock and bunkum and flapdoodle about “rights” and “equality,” you gals lose sight of the fact that us guys don’t always have it so swell.

“Amid all this balderdash and poppycock and bunkum and flapdoodle about “rights” and “equality,” you gals lose sight of the fact that us guys don”t always have it so swell.”

Peggy McIntosh, a homely woman at any age, is famous for her essay “Unpacking the Invisible Knapsack,” which urged white people to divest themselves of their allegedly unearned”and apparently imperceptible”privileges ASAP lest they suffer the hell-pangs of eternal racial guilt. In the same misguided spirit of that essay, I would like to suggest that rather than enjoying unbridled and unchallenged privileges, modern males are laden with several distinct disadvantages that we carry around in our invisible scrotums like granite stones weighing down a stretched-out wineskin. Hence, “The Invisible Nutsack.”

‘Tis a nutsack that weighs so heavily upon our fortunes, we tend to die much younger than you do. Even in this allegedly racist society, black women have a longer life expectancy than white men. While male NFL players are forced to wear pink cleats to fight breast cancer, men quietly die in larger numbers from prostate cancer. But perhaps as the saying goes, men die before women do because they want to.

Our male privilege is so egregious, we are far more likely than women to die in war, in the workplace, and as the result of violent crime or suicide. Despite our society’s “war on women,” we are statistically more likely than females to become homeless and/or alcoholics. Our lives are deemed so valuable, we get shoved to the back of the line when evacuating a sinking ship. Our bodies have always been, and may always remain, more dispensable than those of women.

To our privileged eyes, the legal system appears biased in women’s favor. Even when convicted of identical crimes, men are far more likely than women to be sentenced to prison in the first place, and when they are, their sentences are on average more than 60% longer. Only men and not women are required to register with the Selective Service. Women may receive government funds to start businesses that are unavailable to men. The law leans heavily in women’s favor when it comes to adoption, divorce, and child custody. Since a man has zero say in whether a woman chooses to keep or abort a fetus, he literally has zero “reproductive rights,” yet he will be jailed if he does not financially support his spawn. Both the law and public sentiment automatically favor women in any domestic dispute. Women consume a majority of entitlement programs while contributing a minority of taxes.