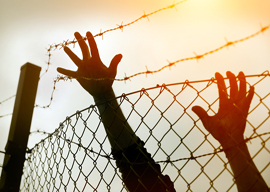 In an interview with NPR last Friday, Trump’s chief of staff John Kelly described the illegal aliens pouring across our border in the most gentle manner imaginable.

He said that illegal aliens aren’t “bad people,” but also “not people that would easily assimilate into the United States into our modern society.” They are, he continued, mostly rural, poor, unskilled and illiterate. “They don’t speak English,” Kelly said. “Obviously, that’s a big thing.”

Kelly violated the civic religion of treating every non-American as better than an American—a potential valedictorian, Medal of Honor winner and Nobel Prize recipient. Naturally, he was called a “racist.”

So what was the point? You’re going to be called a “racist” no matter what you say, so why not be honest: Illegals are self-entitled law-breakers and thieves, stealing jobs and government benefits meant for our own people.

Our cliche-driven media huffed and puffed about Kelly’s presumed descent from immigrants.

CNN’s Don Lemon said, “But like most Americans, Kelly comes from a family of immigrants, doesn’t he?”

“Today we’re getting peasants who not only don’t speak English, they don’t even speak Spanish and are also illiterate in their own dialects.”

If you’d read “Adios, America!” Don, you’d know this is PC nonsense. As late as 1990—a quarter-century into Teddy Kennedy’s plan to remake our nation into a Third World hellhole—half of the population traced its roots to the Americans of 1790. We’re a real country, made up of the people who created it, much like other countries.

There were Irish here at the time of our founding who fought in the Revolutionary War. I’m related to one.

CNN’s John Berman said: “(I)f I remember my high school American history—and I do—America in the midst of the 19th century and the beginning of the 20th century was built on immigrants.”

It’s as if nothing happened in America until 1850—no Jamestown, no Declaration of Independence, no Constitution, no creation of a brand-new civilization out of mud.

Long before America experienced its first immigrant wave in the 19th century, this was already a wildly successful country—rich, literate and free (with one glaring exception, soon to be corrected in the only war ever fought to end slavery). We’d won a war with Great Britain, conquered the West, and invented electricity, refrigeration, suspension bridges and a democratic republic.

Twitter lit up in response to Kelly’s inoffensive remarks, with idiots pointing out that THE SAME THING WAS ONCE SAID ABOUT THE IRISH!

Yes, and the people who said it were right. Let’s not sugarcoat what wonderful immigrants the Irish were.

In the draft riots of 1863, New York City’s Irish exploded in feral violence over the Emancipation Proclamation, fearful that they would soon have to compete with freed blacks for jobs.