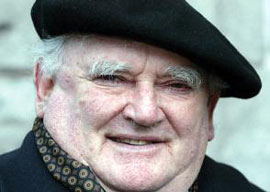 Sure, the Irish are a little slow, but it took them longer than you’d think to leap onto the “genocide” bandwagon (or should that be “cattle car”?).

Coogan asserts that British and Irish historians alike have hesitated to call the Famine the deliberate murder of “a million or more shiftless,” fecund (and gauchely Catholic) paupers by their British overlords, a final solution to the Irish problem.

“It was as if they wanted us to consider the Famine as a sort of 19th century precursor to the Scarsdale Diet,” Coogan says Irish-ly.

This matters (if not to Coogan, then to others) because as professional victimhood lobbyists know so well, thar’s gold in them thar wedding rings and dental fillings. “Genocide” earns you abject official apologies, socially leverageable favored victim status, and, best of all, financial reparations. Just ask Japanese Americans.

“Contrary to those goddamn songs they sing all the time, the Irish would really rather bitch than fight.”

Or look at Canada’s Bernie Farber. A one-time “Official Jew,” he’s now pushing the UN to declare the Great White North’s treatment of its native people “genocide.” It’s an unseemly undertaking for a man whose Polish father was welcomed into Canada after World War II. It’s also a funny kind of “genocide” when there are more of you now than there were then. (Also: Why don’t we demand reparations from Indians for introducing the deadly scourge of tobacco to the rest of the world?)

Give it ten years, and we’ll see Farber trying to extort reparations out of the Scouring of the Shire.

Of course, the genocide market has its ups and downs. Past massacres are no guarantee of future memorials. The Ukrainians have one of the strongest cases around, but that clunky “brand name””the Holodomor“is killing their cause. As I’ve said here before, “Many crimes are deemed unspeakable, but the Holodomor is the only one that’s also unpronounceable.”

So how close are the Irish to winning the ethnic-cleansing sweepstakes? They got their official apology from Tony Blair in 1997″always the key first step, but we’re well into a new century and those checks aren’t even in the mail. What gives?

I blame…the Irish. They love to bitch about how hard done by they are, arguing with the Italians over who gets to call themselves “white niggers” and moaning about those “No Irish Need Apply” signs (which, according to one academic, were as real as leprechauns).

Maureen Dowd recently mounted her enviable soapbox in The New York Times to condemn the supposedly inaccurate portrayal of the Irish “help” in Downton Abbey. Sure, Dowd’s ancestors were servants, but they weren’t…servants. Or something:

My grandmother and her nine sisters were tall, strapping women who immigrated to America from Ireland in the second decade of the 20th century and found jobs as maids, cooks and nannies for wealthy families with names like Gore and Mellon….

As my great-aunts worked tirelessly to grasp shards of the American dream, they were not gliding about mansions playing confidantes to malleable employers, much less co-conspirators in moving the bodies of dead lovers.