The Islamic Republic of England 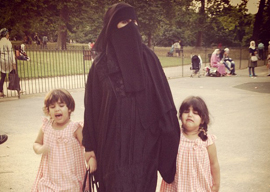 On Monday, the harried horny heretic Salman Rushdie told the BBC, “A book which was critical of Islam would be difficult to be published now.” Rushdie was talking about his controversial 1988 tome The Satanic Verses, which led to the Ayatollah Khomeini issuing a fatwa against him. Rushdie knows Muslim rage intimately but he does not approve of the West’s reaction to the Middle East’s reaction to that weird YouTube movie that was kind of like The Satanic Verses for retards. “We’re in a difficult place because there’s a lot of fear and nervousness around,” Rushdie said of the West’s ethnomasochism. “The fact a documentary about Islam can be pulled because someone is worried about the consequences is an indication of that.” These comments are particularly poignant because Rushdie hails from the epicenter of Islamic rage: Britain.

I wouldn’t have believed how bad it was if I hadn’t just seen it with my own eyes. Sure, America also overindulges extremism in the name of tolerance. Libyans just murdered one of our ambassadors and America’s anger appears to be directed at the guy who made the murderers angry. In 2009, we learned the FBI had ignored warning signs that Major Nidal Hasan was going to shoot up Fort Hood because they didn’t want to appear racist. Here in New York, areas such as Astoria in Queens look more like Islamabad than they do Archie Bunker’s hometown. But we still arrest Muslim bad guys. Britain does the opposite. The children of Pakistani immigrants in Queens wear skinny jeans and listen to dubstep while their cousins in London stand on street corners preaching the joys of sharia law. Where we have faults, they have fault lines.

Melanie Phillips, author of Londonistan, says capitulation is the root of England’s imminent demise. At a talk earlier this year she said, “What Britain and all the other faint hearts fail to grasp is that the greatest single driver of terrorism is terrorism”or to be more precise, the demoralized reaction to it.” She was talking about the surge in terrorist recruitment after the 7/7 bombings and is one of the few Brits to notice that “The greater the terror, the greater the self-flagellation of its victims.”

“When you’re the only non-Muslim family at the playground, your kids start to wonder why you brought them to Fat Ninja Park.”

One of the most iconic photographs from the 7/7 bombings was university lecturer John Tulloch covered in bloody bandages. A British magazine featured him next to a quote from Tony Blair that included the lines, “When they try to divide our people…our values will outlast theirs.”

Tulloch is now facing deportation because he was born in India when his British Army Officer father was stationed there. Like his wife and kids, he’s had a British passport his whole life but the UK Border Agency confiscated it in the 90s, citing some bizarre old clause that deemed him a “British subject without citizenship.”

This is in a country with seven million foreigners, where 30,000 illegal Pakistanis are “missing,” and where, as Phillips says, “1,600 Islamic terrorists, most of them British Muslims…[are] trying to get a nuclear or dirty bomb to use against their fellow countrymen.”

In today’s Britain, almost 40% of young Muslims say they would prefer to live under sharia law, yet an old professor whose family has been British for hundreds of years has to go. It was 2005 when Blair made his commitment to “our values” but only two years later, David Cameron explained, “it is mainstream Britain which needs to integrate more with the British Asian way of life, not the other way around.”

The Magna Carta said, “No free man shall be seized or imprisoned…except by the law of the land,” but it appears the new interpretation is, “No Muslim can be punished, ever.”

I was born just outside London and I commiserate with John Cleese when he says, “London is no longer an English city.” Just West of London proper is a place called Southall. As I walked down their main street The Broadway a couple of weeks ago, I did not see one person who did not appear to be “British Asian.” There were Sikhs and Hindus and Bangladeshis and Muslims galore, but not a single English biddy carrying her shopping bags back home for tea. A teenager in a turban threw his empty energy drink on the street in front of me just as I realized my “Burn this Flag” American T-shirt had gone from mildly ironic to wildly incendiary.

During our visit last year we went to a beach called Southend I used to visit as a kid. This 19th-century working-class vacation spot still has the bumper cars and helter-skelter, but I didn’t see any old geezers with hats made of handkerchiefs. Instead, I saw a woman walking into the water wearing a chador. Our host sensed my outrage and tried to diffuse it by saying, “Oh, that’s lovely. You know, when I was a girl coming here, everyone looked the same. Now there’s so much variety.”