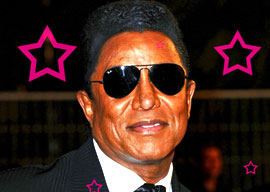 Ever since childhood I”ve heard that the blacks were good entertainers. As I lurch deeper into adulthood, I confess that I find few things in life more entertaining than the names black people give themselves and their children. Besides basketball, I think we can all agree that coming up with creative names is a craft at which blacks are superior to all other races. When people say there haven”t been many black inventors, they ignore all the great names that black people have invented.

Having said that, I also feel that American blacks would be better served were they to channel their abundant creative energies into other fields such as engineering and microbiology. I also feel that by consciously giving themselves ever-blacker names over the past generation or two, black people are practicing a form of linguistic segregation that may be impeding them from living up to their full potential in this society, whatever that potential may be.

Now that singer Jermaine Jackson”brother of Michael, Janet, La Toya, and the eternally rotund and underappreciated Tito”has legally changed his name to Jermaine Jacksun, I think it’s high time to talk about American blacks and the ridiculous things they do with their names. Yeah, sure, right, well, OK, the “Jacksun” thing sounds like an incredibly insignificant news story, yet somehow I feel it embodies everything that’s wrong with our culture right now. This was the tipping point for me. This was the one that broke my back. This was the one that made me feel that something must be done, that compelled me to finally speak out after years of smoldering silence. This is the Jermost I can take, and I can”t take any Jermore.

“What does it say about our world when Slappy White and Nipsey Russell suddenly seem like reasonable names?”

He was born Jermaine LaJuane Jackson, as if that wasn”t sufficiently ridiculous. After a 1989 conversion to (what else?) Islam, he started also calling himself Mohammad Abdul Aziz. And as of last Friday, he is now legally Jermaine Jacksun. He says he chose the name for “artistic reasons” and hinted he wanted it to reflect “a sunny day in California.”

Well, first and foremost, above all else, because it’s stupid, that’s why. The question we should really be asking is why the hell Prince and P. Diddy do it, too.

I mean, it’s not bad enough that Jermaine already has a kid named Jermajesty? (At press time, rumors that he has sired an illegitimate child named Jermonkey with a woman named Jermima appear to be false.) When is a ridiculous black name too ridiculous for the proper functioning of a sane society? Personally, I think we”ve reached Peak Black Name and it’s time to start dialing it back a tad.

It wasn”t bad enough when Prince, who at least was born Prince Rogers Nelson, changed his name to a symbol and then back to Prince, rendering him The Artist Formerly Known as Prince But Who Is Now Known as Prince Yet Again?

It wasn”t sufficient when Snoop Doggy Dogg, born Calvin Broadus, Jr., shortened his name to Snoop Dogg, then threatened to change it to Niggarachi before recently upgrading it to a more Jamaican-flavored Snoop Lion?

When Russell Tyrone Jones kept changing his handle from Ol” Dirty Bastard to Big Baby Jesus to Dirt McGirt, why didn”t anyone in the black community stand up and say, “People, we need to have a talk”?

It wasn”t enough to forever shame the entire black race from ever calling themselves anything ridiculous again after Sean Combs morphed to Sean “Puffy” Combs to Puff Daddy, then P. Diddy, then Diddy, then Swag, and is now threatening to call himself Sean Combs again? That wasn”t a series of teachable moments?

I”m not talking about stage names, which are liberally utilized by celebs of all hues. Nor am I trying to allege that only blacks give their children ridiculous names. But what seems to be a predominantly black phenom is the ostentatious, high-profile, mid-career name change, one that occurs after they”ve already become famous with another name of either genuine or contrived origin.

In an ongoing attempt to cast off their so-called “slave names,” black Americans have drifted away from Anglo-sounding names ever since emancipation. At first the names were still rooted somewhat in Western tradition”many a black American male was named after a biblical figure or a Roman emperor”but as the 1960s kicked in, black American naming traditions more and more resembled a collective middle finger to white America.

Islam was a strong early influence in the renaming process and was felt with special cultural force in sports. Cassius Clay became Muhammad Ali. Lew Alcindor morphed overnight into Kareem Abdul-Jabbar. One of the more absurd name switcheroos in sports was when NBA hoopster Lloyd B. Free changed his name to World B. Free in 1981. Intentionally or not, this was mirrored in 2011 when basketball player Ron Artest, known largely for being a violent hothead, changed his name to Metta World Peace.

Perhaps the most egregious case of African American name-changing retardation in pro sports came in 2006 when football player Chad Johnson changed his name to Chad Ochocinco, mistakenly thinking that was the Spanish word for his jersey number 85. (“Ochocinco” means “eight five” rather than “eighty-five.”) He then announced that he was again changing his name to Haichi Go, which is Japanese for, again, “eight five” rather than “eighty-five.” Last July he legally changed his name back to Chad Johnson, claiming he “wanted to reconnect with his former self.”