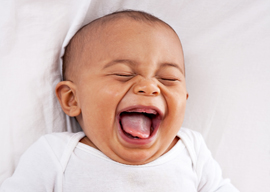 Oh, no! Steve King gone done it now! He said, “We can”t restore our civilization with somebody else’s babies.” Then he doubled down by claiming that blacks and Hispanics would be at each other’s throats if whites ever became a minority. When pushed to apologize, he threw in some caveats about how race-mixing doesn”t bother him and you could adopt a black baby if it makes you feel better, but he refused to take back his #hatefacts.

The backlash was instantaneous. A black guy called him “bigoted and racist.” An Asian showed King a picture of Asian babies. Jeb Bush said it “doesn”t reflect our values” and Chelsea Clinton said it was “particularly ironic and painful” on Purim, when Jewish kids dress up because somebody didn”t kill them thousands of years ago. King said they”re all being “willfully ignorant,” and that too is a #hatefact.

“Here in the real world, it’s about assimilating to Western culture and promoting our values no matter who you are.”

Even the sane elements of the backlash were wrong. The Federalist claimed he should have focused on culture and not race because it’s not more white people we need, it’s more Westerners. This is a beautiful notion and I fully agree with it, but here on earth, we”re not taking in immigrants who want to assimilate. In fact, we are openly encouraging immigrants not to assimilate. Public school teachers have dedicated their careers to eradicating patriotism and teaching our children how cruel and unusual we have been throughout history. Politicians are knowingly avoiding immigrants who assimilate and focusing on ones who will antagonize the native population. This is especially true in Britain, where Tony Blair’s speechwriter conceded as much. Look at the London bombings. They were all radicalized in Britain. One of them was a Jamaican who grew up in Bradford, where the Muslim population is booming. Since the bombings, London has elected a Muslim mayor who proudly exclaims, “Immigrants shouldn”t have to assimilate.”

Here in America we have the Tsarnaev brothers, who grew up reading comic books and watching sports; but after years of being told America sucks, they began to believe their relatives back in Chechnya. Then they blew us up.

If we were taking in babies who liked us, King’s backlash may have had some credibility. We have hundreds of thousands of Christian refugees literally dying to come here, but our immigration policy prefers Muslims. Buchanan was pilloried back in 1992 for noticing that Englishmen assimilate better than Zulus, but this controversy was prophetic. Muslims are the least assimilable group of immigrants we have, but we just can”t get enough of them despite the dead canaries in the coal mines of Britain, Germany, and the rest of Europe. How about we take in some Syrian Christians who just had their villages destroyed by ISIS? Can we have some Coptic Christians? Christian children are being crucified all over the Middle East and if we were taking in those babies, King would be wrong.