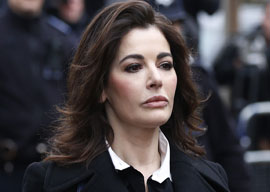 As the British press draw themselves bloated and bloody-faced from their feeding frenzy on the slaughtered marriage of the “domestic goddess” Nigella Lawson to advertising titan Charles Saatchi, I was struck by how this duel in open court between two supposedly dexterous manipulators of the British media proved that in the end, those who live on the savannah plains of celebrity, no matter how dangerous and apex-level a predator they are, still end up as food for the jackals.

Lawson is a daughter of Nigel Lawson, Margaret Thatcher’s Chancellor of the Exchequer, and a well-known and well-liked journalist, author, and television chef of almost Martha Stewart proportions in the UK. She had begun to move into the US market, cohosting The Taste on ABC. However, this month she found herself summoned to court as prosecution witness in the trial of two of her former assistants for defrauding her ex-husband of almost a million dollars. Saatchi, once half of the advertising agency Saatchi & Saatchi which helped put Lawson’s father’s government”headed by the late Margaret Thatcher”into power in 1979, has been accused of using the trial to disgrace his former spouse and mother of his children by bringing up the seemingly irrelevant allegation that she systematically abused cocaine during their ten-year relationship (a claim she partially denies, i.e. the systematic bit).

I remember as a teenager walking past the house they shared in Eaton Square, London, occasionally catching a glimpse of the apparently happy couple decamping from their grand neoclassical 19th century house, its windows opening onto an incongruous gallery of Damien Hirsts, Tracey Emins, and other products of the Britart movement which Saatchi had so vigorously collected and promoted to the advantage of both his bank balance and his fame. They seemed gilded and distant entities, wrapped in their cocoon of immense wealth and fame, even to their near neighbors such as myself.

“This is the sort of binary simplicity I expect to find in the Catholic heartlands of bullfighting, not in the comment pages of London’s liberal media elite.”

What interests me is not the prurient moralizing of the gutter press about the couple’s personal habits and the sadness of what was clearly once a love match, although one reinforced with status, security, and power”the latter seeming to be the tragic flaw which turned so toxic”but the narratives which are being written and rewritten about them, some of it by their own hands, or at one remove by their machinations. Saatchi had been portrayed as the heartbroken husband, making arrogant gestures and errors, granted, but essentially flailing in romantic grief, only to become the demonic slave-owner who cannot deal with the emancipation of what was once his property. Lawson, on the other hand, seems to have transmuted from battered housewife to apogee of modern feminism, facing down her accusers and tormentors in court and slaying the dragon of the patriarchy with integrity, a quick wit, and exceedingly well-applied make-up.

The truth, as ever, surely lies somewhere between these glib and hackneyed character sketches, but it is the story itself and the way newspapermen feel the urge to dress it in tired clichÃ© that is really fascinating. How often can the same story be told?

On the floor above the rather less grand Eaton Square apartment where I grew up lived the son of John “Aspers” Aspinall, a raffish figure in London society who ran private gambling clubs frequented by the nobility and gentry and whose 1958 trial singlehandedly led to the legalization of casinos in the UK via the Betting and Gaming Act 1960, known as Aspinall’s Law.

It was in his most famous casino, the Clermont Club”which counted five dukes, five marquesses, twenty earls, and two government cabinet ministers among its founding members”which was the center of more than a few scandals in the UK and even rumors of an attempted coup d”etat against Harold Wilson’s Labour government of 1974 and the installation of the Queen’s uncle-in-law, Earl Mountbatten, as head of state. (It was not as far-fetched in planning or execution as one might think: Other members of the club included James Bond author Ian Fleming and SAS founder David Stirling.)

However, the most discussed scandal arising from the Clermont set took place that same year around the corner from Eaton Square, in Lower Belgrave Street, where Lord Lucan“a professional gambler and 7th holder of an earldom whose third incarnation had charged with the Light Brigade in the Crimean War”is said to have murdered his nanny by mistake and then attempted the murder of his true target, his wife, who was separated from him and had gained custody of the children in a rather vicious and public scandal.

In the local pub called The Plumber’s Arms hangs a framed newspaper clipping from the time describing how she had run into the bar, bloodied and bedraggled, gabbling about a murder in her house. The police were called. In the meantime her husband had made good his escape and, having telephoned his mother to look after the children and visited his friend the artist Susan Maxwell-Scott telling a story about discovering an intruder in his estranged wife’s house, he then vanished without trace, never to be seen or heard of again.

When I was a schoolboy at Lucan’s alma mater, he came up surprisingly often in conversation, partly because my contemporaries included the offspring of so many cited in the case: the sons of financier Jimmy Goldsmith being the most notable, but also the nephew of Susan Maxwell-Scott, the last person known to have seen Lucan alive. (Among this group was, coincidentally, Lawson’s half-brother.) The standing theory was that he”d made it out to Africa simply because that was somewhere in the world where his friends had the power and connections to conceal him with relative ease and at relatively little expense. How long he survived out there was anyone’s guess. If people knew the definitive answers, they weren”t letting on, and in that environment very few secrets were kept. More than a few boys said they were sure that their fathers knew the answers.