The KKKrazy Glue That Holds the Obama Coalition Together 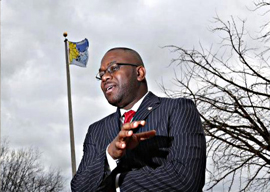 We are constantly told that the GOP is doomed because it’s the party of straight white men. That may well be true, but few have asked: How can the diverse Democrats hold together? How can special interests as different as blacks and gays be kept in sync?

The answer appears to be: The Obama coalition can stay together only by stoking resentment”and, indeed, hatred”of straight white men. This naked animus is rationalized by projecting the hate felt by the victorious Democrats onto the losers:

To service this Hunger for Hate, the prestige press assiduously generates the Democratic Party’s KKKrazy Glue by whipping up fear and loathing over hate crimes, even when they didn’t technically happen.

Last week we were solemnly informed of a one-man KKK rally at Oberlin College. (Apparently it was a lady in a blanket.)

Then the top story on washingtonpost.com last Friday evening was the “mysterious” murder back on February 26th of Marco McMillian. He was a black gay candidate for mayor of Clarksdale in Mississippi, a state with a “dark history of racial brutality,” as the Post helpfully reminded.

“The Obama coalition can stay together only by stoking resentment”and, indeed, hatred”of straight white men.”

A hate crime, right? It’s Mississippi, so what else do you need to know? Clearly, a gang of homophobic redneck Christians had hunted down with their AR-15s the gay black activist bravely challenging Clarksdale’s white power structure. No doubt, County Sheriff Bull Connor III then covered it up, which must be why it’s still big news in the Washington Post a week and a half later.

Except for…well, except for everything.

First, the sheriff of Coahoma County, Charles Jones, is black.

And McMillian was running against a local black political dynasty. Clarksdale has had a black mayor for 20 of the last 24 years, Henry Espy. You might vaguely recognize the Espy name because Henry is the brother of Mike Espy, who was Bill Clinton’s first Secretary of Agriculture. One favorite in the race is the mayor’s son Chuck, who just resigned from the Mississippi legislature to run.

As mentioned in countless blues songs”Clarksdale is home to Robert Johnson’s “Crossroads,” where Highway 49 and Bob Dylan’s Highway 61 intersect”the Mississippi Delta is a poor place. Thus, political jobs are sharply contested. The Espy family has spent much time in court on corruption charges but always seems to come out on top.

(The 34-year-old McMillian had himself already figured in a financial scandal when he had been executive assistant to the president of Alabama A&M University. Improprieties in his pay led to the downfall of his boss.)

The New York Times, which embarrassed itself in its initial Oberlin assault-blanket story, actually did a reasonable job of hinting back on February 28th that the dead man’s family was suspicious of the local black power structure:

…the police said they had no reason to suspect that his death was a hate crime….“I believe it was political,” said one family member….“Maybe some people didn’t want him to run. Maybe he was a threat. They wanted Clarksdale to stay the same.”

The Times didn’t mention the race of who wants things to stay the same in Clarksdale, but it did link to the hereditary leaders’ pictures:

With the exception of a four-year period during the 1990s, the town has been led since 1989 by Mayor Henry Espy, who has announced that he would not seek another term. Those vying to succeed Mr. Espy include his son, Chuck Espy, a member of the Mississippi House of Representatives.

But how many journalists can be bothered to click on links before hyping their favorite obsession: white hatred and homophobia in Dixie? Very few, apparently.