The Last Hurdle in Sports 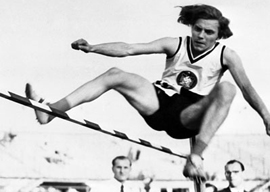 I turned on the TV and saw a new reality show with an intriguing premise: How big of a head start does a white woman need to outrun a black man? While skinny women frantically raced toward the finish line, a muscular black youth sportingly spotted them a 30-meter lead, then accelerated effortlessly and overtook all but the most desperately striding Russian woman.

But this turned out to be the Olympic 800-meter race for women, even though the silver medalist, South Africa’s Caster Semenya, is built like an LSU cornerback.

The Olympics have always had problems figuring out who should be eligible for women’s events because men invented practically every sport”except rhythmic gymnastics and synchronized swimming”as some kind of test of manliness.

Thus, the Nazis entered the rather homely Dora Ratjen in the women’s high jump in the Berlin Olympics. Dora went on to set the women’s world record in 1938 before an Emperor’s New Clothes moment in which a train conductor objected that he was just a man in a dress, persuading Dora to change his name to Heinrich.

Other early women’s track stars were what might be called self-starters. The most famous was the boyish Babe Didrikson, heroine of the 1932 Los Angeles Olympics.

“In this century, who has ever gotten ahead by demanding fair play for the majority?”

The other women on the US team found riding the train to California with Babe an ordeal because she bragged indefatigably. But the male sportswriters in LA loved her and made her a star. (In the conventional narrative, men conspire to keep women from playing sports, but history reveals that a lot of masculine ingenuity has been devoted to persuading women to try the sports that men love.)

In her mid-20s a few years after her Olympic triumphs, Babe suddenly grew breasts, married professional wrestler George Zaharias, and became the first great woman pro in the more genteel sport of golf.

In the 1936 women’s 100-meter dash, the six-foot-tall Helen Stephens edged out the square-jawed Stella Walsh, the 1932 gold medalist. Walsh retaliated by accusing Stephens of being a man in drag. (Hitler was so smitten by Stephens that he invited the Amazonian American to accompany him on a dirty weekend.)

Decades later, an autopsy revealed that Walsh was hermaphroditic.

The Cold War inspired countries to work harder to make competing in the Olympics fashionable among women. In particular, female African-American runners tended to be less butch relative to their menfolk.

The fall of the Berlin Wall reduced countries” motivation to demand sex testing of their opponents, and the practice fell into abeyance until the victory at the 2009 World Championships by the 18-year-old Semenya.

The women forced to run against Semenya complained that the youth is obviously more male than female. Unsurprisingly, according to newspaper investigations, medical scans observed undescended testicles instead of ovaries.