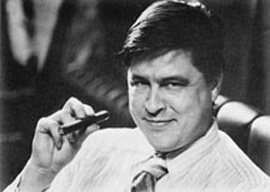 Recently I received the galleys for the anthologized essays and book reviews by the late, great Joe Sobran (1946-2010). The anthology pieces come out of the period when Joe was working at National Review, a relation that started in 1972 and allegedly ended because of irresolvable political differences in 1993. The essays are made even more inviting by Pat Buchanan’s foreword, Ann Coulter’s afterword, Tom Bethell’s preface, and publisher Fran Griffin’s eloquent introduction. The book features a cover portrait of Joe while still in his prime, nattily dressed and sporting a Menckenesque cigar.

One value of this anthology is that it reveals a brilliant social commentator outside the confrontational context in which he spent most of his life’s last two decades. Because of his dogfight with the American Zionist lobby that resulted in a series of Sobran’s critical, sarcastic comments about Jewish influence on the media, Joe found himself professionally and, except for a few steadfast friends, socially isolated. He was also unfairly accused of Holocaust denial, which he might have avoided had he not spoken on a totally unrelated topic at a conference sponsored by the Holocaust-denying Journal of Historical Review in 2002.

“The conservative movement committed a supreme stupidity when it began expelling its greatest talent. In Sobran’s case, it threw a remarkable stylist overboard.”

But the attacks would have kept coming no matter what. Joe took on powerful enemies whom he couldn”t match in firepower. The last few years of his relatively short life were also marred by health problems, and I recall seeing Joe during this period looking frailer each time I encountered him. I”ve been told that only toward the end did he lose his wit and proverbial way with words.

In this anthology, however, one meets a political and social writer with a sense of language that I found unmatched among my contemporaries. (And I”m including Buckley, who for all his personal flaws could turn a phrase but not as well as the editor whom he kicked out to please his well-placed friends.)

The conservative movement committed a supreme stupidity when it began expelling its greatest talent. In Sobran’s case, it threw a remarkable stylist overboard. He could construct elaborate theological and constitutional arguments with an economy of words.

It is not that Joe wrote on topics that no one else at NR was addressing. Many of his themes”such as liberal hypocrisy, Catholic orthodoxy, modern culture’s hedonism, and capitalism’s merits”were subjects that often surfaced in conservative publications thirty years ago. Joe was certainly not the only writer who engaged them. What should attract readers is his epigrammatic writing style and the offhanded way that he states deep insights. We are still combating many of the same things Joe went after thirty years ago, although the cast of characters is not entirely the same.

For me the most interesting statements in the collection are the ones where Joe examines the rise of PC. An awareness of this problem was not always apparent from his observations, and as late as 1977, when he wrote about the televised version of Alex Haley’s Roots, he gave the ABC producers and the author the benefit of the doubt despite the series” inaccuracies and exaggerations:

The value of Roots is that it imaginatively provides American blacks with a legitimizing lineage, a therapeutic myth and beneficent stereotype acceptable to both races, fostering black self-assurance while actually minimizing white guilt.