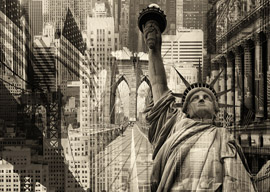 At a ceremony for some of the various policemen recently shot by his fellow Black Lives Matter advocates, President Barack Obama described the postapocalyptic hellscape of gun violence that is America today:

Decades of progress made in bringing down crime are now being reversed by this administration’s rollback of criminal enforcement. Homicides last year increased by 17% in America’s fifty largest cities. That’s the largest increase in 25 years.

Pundits who, only days before, had been vociferously lamenting the gun crisis rushed to denounce Trump for fearmongering about crime.

After all, law and order is not supposed to be on the agenda for 2016. Hillary Clinton’s website says the priority should be to:

End the era of mass incarceration

Today in America, more than one out of every 100 adults is behind bars. This mass incarceration epidemic has an explicit racial bias, as one in three black men can expect to go to prison in their lifetime.

The Democratic nominee proclaimed on July 8, 2016:

Families are being torn apart by excessive incarceration. Young people are being threatened and humiliated by racial profiling.

Thus, Hillary invited the mother of would-be cop killer Michael Brown to address the Democratic National Convention on the lessons of Ferguson.

Trump’s carefully documented Republican convention speech came as an unwelcome intrusion into this new elite consensus against law and order, which helps explain the agonized yelps in response to Trump’s “dystopian” picture.

But on Monday, the Major Cities Police Chiefs Association released homicide totals for the first half of 2016. The Wall Street Journal reported:

That’s another big increase coming on top of last year’s sharp rise, especially in an era when homicides should be falling several percent per year due to improved emergency medical care (for example, 42 of the 47 people shot in Chicago last weekend survived) and the enormous proliferation of video cameras and other crime deterrents. This is an era when robbing people with a six-gun is not a profitable career choice.

A few percentage points of the 2016 spike are due to the Islamic terrorist attack on the gay nightclub in Orlando in June. But a bigger impact on the national statistics has been a classic case of the Ferguson Effect: the rise in homicides in Chicago from 211 in the first half of 2015 to 316 in the same period in 2016. This followed the Nov. 24, 2015, release of video of the lamentable police shooting of Laquan McDonald.

But you are supposed to worry about guns, not crime. Democratic economist Paul Krugman wondered:

Last year there were 352 murders in New York City. This was a bit higher than the number in 2014, but far below the 2245 murders that took place in 1990, the city’s worst year. In fact, as measured by the murder rate, New York is now basically as safe as it has ever been, going all the way back to the 19th century….

How, then, was it even possible for Donald Trump to give a speech accepting the Republican nomination whose central premise was that crime is running rampant, and that “I alone” can bring the chaos under control?

If history for you starts in 1990, it is indeed hard to figure out what’s worrisome about Hillary’s project.

Yet, it’s not as if the annals of crime in New York City before 1990 are an obscure topic that has never been explored in the social sciences or popular culture. Indeed, Krugman himself links to a graph showing the colossal increase in homicides during the liberal 1960s in New York.

The rise and fall of murders in New York City has been famously related to the ruling political ideology for the past 50-plus years.

During New York’s 1946″58 Yogi Berra Golden Age, the city never had a year with even one murder per day.

During the mayoral terms of the liberal Republican social justice warrior John Lindsay (1966″73), the body count soared to 986 in 1968. As the WASP mayor fought for the rights of blacks and Puerto Ricans against the largely Irish NYPD, the cops retreated to the doughnut shop.

It would be nice if policemen didn”t tend to be divas who sulk and slack off when political leaders demonize cops as racist murderers and encourage black rage, but that’s the way they are.

After that, the death totals mostly plateaued, hitting highs only when there were new drugs for dealers to fight over. During the powder cocaine turf wars, homicides inched up to a record of 1,826 in 1981, before falling to 1,384 in 1985.

New York City elected its only black mayor, Democrat David Dinkins, in 1989 at the height of the crack cocaine wars. During his first year in office, homicides peaked at 2,245, drifting down only slightly over the next three years.

On Feb. 14, 2016, in a lengthy speech at the David N. Dinkins Leadership Forum at Columbia University, Hillary announced:

It’s time to end the era of mass incarceration…. So yes, Mayor Dinkins. This is a time for wisdom. A time for honesty about race and justice in America.

But the voters of New York City didn”t much like Mayor Dinkins” disastrous term, tossing him out in the 1993 election, the first of five consecutive defeats for Democratic mayoral nominees in the nominally very liberal city. (Obama carried 81% of the vote in NYC in 2012.)

In the mid-1990s, the new pro-police team of Republican mayor Rudy Giuliani and his police chief William Bratton oversaw an impressive drop from 1,946 murders in Dinkins” last year to 1,177 in Giuliani’s second year.