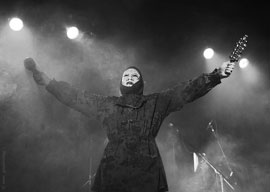 “Fascism” is the preferred political swear word of the left. Fascism was largely a European phenomenon, and an anticapitalist one to boot. In America we got FDR’s alphabet soup instead of jackbooted thugs rocking Hugo Boss. Still, all you have to do is tell a bunch of unemployed college students to stop camping in a public park and they’re dropping the leftist “f” word.

Quick pop quiz: Actual, historical fascists were known for which of the following?

A) Dressing up in fetish gear and playing dirgeful folk jams.
B) Organizing to shut down speech with which they disagree.

This irony was lost (surprise of surprises) on the “antifa” (antifascist) leftist crowd who recently turned their guns on British/Australian neofolk musicians Death in June. Names will not be named here, as shrieking mobs of would-be terrorists need no help getting publicity. However, DI6’s (as they are known to the cognoscenti) recent “Death of the West Tour” of the United States provides a laughably unteachable moment about who are the real fascists in America today.

Formed in the early 80s, Death in June split off from the Goth movement in favor of traditional European folk and martial influences. Hardly a fascist group, they’re better described as a band built around (gay) founder and driving force Douglas P.‘s Nazi fetish. Sure, the band flirts with Nazi iconography with their Totenkopfs and their Algiz runes. What of it? Is anyone seriously suggesting that Slayer and MotÃ¶rhead are fifth columnists for the Fourth Reich?

If anything, DI6 stand in a Goth tradition older than the genre itself, stretching backward to Bowie. Here’s the formula: Ambiguously flirt with fascist iconography but leave a bit of wiggle room. Smirk while making inflammatory statements about genocide as the highest form of self-expression or how you really have to admire that Hitler chap because wasn’t he just like a rock star himself, maaan?

Bake 60 minutes for a ready-made controversy every time your group does anything. Music historians still debate to this day whether Bowie gave a Sieg Heil salute or was just waving to the crowd one fateful day.

Yes, my friends, it brings me no pleasure to tell you that there are some people who take this stuff seriously.

But does playing dress-up make a band a “Nazi band?” Are the Sex Pistols and the Dead Boys the political equivalent of Skrewdriver and Max Resist? To truly be a “Nazi band,” shouldn’t a group have actual ties to National Socialist organizations? There is no shortage of such musical acts and no one, so far as I can tell, is suggesting that Douglas P. has any connection to the legions of mouth-breathing, basement-dwelling keyboard warriors that make up the post-WWII neo-Nazi movement, even if he has been known to make the occasional shock shock shocking! statement cryptically and ambiguously supporting them.