The Legacy of the Mad Kaiser 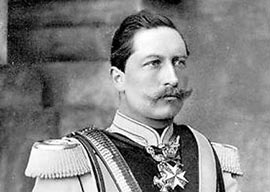 Who was the great villain of the 20th century”the person most to blame for the evils of those decades?

The stock answer is the person whose name is an anagram of “HEIL! OLD FART.” I disagree. It seems to me the title properly belongs to Lenin, the guy who really got the totalitarian ball rolling. His influence was worldwide, and lasted far longer than Hitler’s.

Mao, Kim, Castro, Ho, and other practitioners of modern utopian despotism all modeled their party organization on Lenin’s, as indeed did Hitler. A milder, dumbed-down form of Leninism is still the state ideology of Western society today, generating endless rancor and discord, though mostly of a nonlethal kind. What we call Cultural Marxism is really Cultural Leninism: the notion of human society as a structure of cruel, amoral oppressors reveling in their heartless supremacy over soulful, righteous victims”a notion in direct line of descent from Lenin’s pithy formula: “Who? Whom?”

(Ed Capano, former publisher of National Review, told me a story about visiting Moscow with some colleagues back in Cold War days. Ed and columnist Keith Mano went to see Lenin’s preserved corpse. Emerging from the mausoleum, Ed noticed that Mano was pale and trembling. What was the matter? he asked. Mano, a religious man, replied: “I have just looked on the face of the Antichrist.”)

“What we call Cultural Marxism is really Cultural Leninism: the notion of human society as a structure of cruel, amoral oppressors reveling in their heartless supremacy over soulful, righteous victims”a notion in direct line of descent from Lenin’s pithy formula: “Who? Whom?””

As a candidate for runner-up in the 20th-century villain pageant, I would nominate Kaiser Wilhelm II, the monarch of Germany from 1888 to 1918. This comes from reading John RÃ¶hl’s concise biography of the Kaiser, published this summer.

RÃ¶hl has written a much larger biography of Wilhelm II/?tag=taksmag-20: three big volumes totaling 4,000 pages and based, he tells us, on “fifty years of original archival research.” If you want to know that much about the man, good luck to you. If, like me, you just want to satisfy historical curiosity, the 240-page concise version will do.

The overwhelming impression you come away with is of an extremely unpleasant person. The Kaiser was arrogant, stubborn, graceless, and none too bright. He was also delusional in several different ways. He had, for example, the fixed idea that he understood the British better than any of his advisers did.

The grounds for this particular delusion were his blood connection with the British royals. His mother was Queen Victoria’s eldest daughter. Edward VII, who succeeded Victoria, was his uncle. George V, who succeeded Edward, was his cousin. The national anthem of Wilhelm’s Germany even shared a tune with Britain’s.

The delusion would have made more sense if the mother-son relationship had been a healthy one. Everything went wrong there, though, from his very birth”a bungled breech delivery that left him with a malformed left arm”through a childhood literally tortured by cruel attempts to fix the arm, then a loveless adolescence of Spartan discipline. RÃ¶hl tells us that the Kaiser arrived at adulthood with

A brittle, narcissistic amour propre combined with an icy coldness and an aggressive contempt for those he considered weaker than himself.

Somewhere along the way he also acquired a fetish for women’s hands.

Well, the world is full of unpleasant people. Did the Kaiser’s unpleasantness contribute to the outbreak of WWI, the greatest civilizational catastrophe of the modern West?

It seems that it did. There is ample documentation in RÃ¶hl’s book of the Kaiser’s eagerness for war, for victory over France and Russia. He was sure that Britain, the third member of the Triple Entente, would not intervene. His ambassadors in London, and British government ministers, and his royal British relatives, kept trying to set him straight; but what was their knowledge of Britain compared with his?

To be sure, the officials Wilhelm was surrounded with were just as intent on war as he was; in the crisis of July 1914, perhaps even more so. As RÃ¶hl points out, though:

He had personally chosen all these advisers … because he considered them forceful or adaptable, and kept them in office because they followed the guidelines of his policy. The personal rule he had exercised throughout two decades had produced, in the Prussian-German state apparatus and partly also in the officer corps, a dysfunctional polyarchy and a courtier culture in which cautious men … could not make themselves heard.