The Legend of the White Elephant 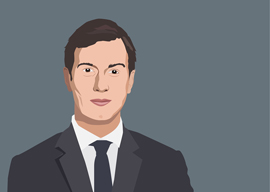 Talk about high life, this is not. I smelled a rat long ago. Then the scent got weaker and weaker. But now it’s back, stronger than ever. It has, of course, to do with the Saudis, the Qataris, and the son-in-law who has also risen, Jared Kushner. About a year ago, the Saudis issued an ultimatum to Qatar, threatening a blockade by Saudi-allied countries in the Gulf. All sorts of accusations were made and 24 hours were given to comply. The 300,000 Qatari citizens froze en masse. The couple million non-Qatari guest workers went on about their business—in fact welcomed the crisis because it momentarily stopped them from being mistreated and abused by Qatari locals, who were busy hiding under their beds. Twenty-four hours came and went and absolutely nothing happened. The blockade is still going on and the Qataris have found alternative sources of food and consumer goods. Their TV network is still on the air, and the only thing that has cramped their style is having to fly their hookers in and not using Saudi limo services. So much for Saudi threats and resolve. Bullshit would be a far more appropriate word.

“At least we Greeks went to war over a woman, not an ugly pile.”

Like everything in that one-thousand-and-one-nights world, there were sketchy details, but no one could really make heads or tails of it. Bahrain, also one of the aggressors, is 80 percent Shiite but is ruled by some clown who treats 80 percent of his citizens as fourth-class. Why risk confrontation with Iran or revolution by its citizens? The Saudis themselves have been bogged down for three years fighting the Hutus in Yemen and have managed only with American help to starve thousands of children to death, spread smallpox, bomb every wedding and funeral service within memory, and illustrate to the world that in the unlikely war between Monte Carlo and the Saudi “kingdom,” Monte would be a heavy favorite.

Uncle Sam, needless to say, is busy selling the two “shitholes” more arms than all of NATO and the Russian Federation possess together. Only last June the good uncle sold Qatar 12 billion smackers of F-15 fighters, and I hate to think of the American and British planes and missiles that have devastated the poorest country in the world and made it even poorer. Enter the son-in-law. As everyone who has ever heard of Donald Trump knows, Kushner’s family needs moola badly. The Kushner firm owns tens of thousands of apartments in New Jersey and Maryland but owes $1.4 billion, due early next year, for 666 Fifth Avenue, a (literally) white elephant that Jared bought ten years ago for the then-unheard-of price of $2 billion. (The white elephant is half empty, its last face-lift forty years ago.) The Kushners were sweating nervously when something happened in November 2016 that got some people very angry and others very happy. The son-in-law’s father-in-law became President of the United States of America. All sorts of Kushner-named people went running to China to drum up business and try to flog 666 Fifth Avenue. Jared’s sister went so far as to give a press conference in China exhorting the Chinese to come and do business with us now that we’re in the White House. But although the Chinese may look funny to some of us, and we might look funny to some of them, no one has ever accused a Chinaman of being stupid. They were happy to go to the White House, but unhappy to even inspect the white elephant. There was Chinese takeout but no Chinese takeover of 666 Fifth Avenue.