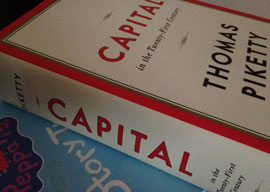 Economics can be a misleading subject. When it comes to devising useable theories on boosting economic growth, its professional gurus often pretend to be a step above the political class; as intellectuals, they fancy themselves to be in a superior position to advise. If the economy is sluggish, it’s the fault of the politicians. Elected officials are weak-willed and unable to listen to the recommendations of those who know better. Unlike legislators, economists claim to not bend to the will of ideology”they only pursue the truth.

That’s the portrait the science fathered by Adam Smith likes to paint of itself, anyway. In real life, economists can be just as biased and politics-driven as the folks who sucker the little people for votes. Ivy League credentials don”t magically erase the inner ideologic bent we all have. If anything, having Harvard or Princeton on your resume only emboldens a false sense of objectivity. Professional economics then becomes an echo chamber of either liberal tropes or conservative proselytizing. That’s why a hefty dose of skepticism should be paid to any new theory or theoretician who is celebrated by econ pundits in major media.

The latest rock star to emerge from the dismal science is Frenchman Thomas Piketty. His magnum opus, Capital in the Twenty-First Century, is being celebrated as a magnificent work of data-driven theorizing. The book dominates the best-seller list on Amazon.com. Progressive hack Paul Krugman calls it the “most important economics book of the year”and maybe of the decade.” Nobel laureate and rich-hater Joseph Stiglitz says Piketty’s massive collection of empirics is a “fundamental contribution” to the profession. The Nation‘s Eric Alterman praises the “Marxism-tinged treatise” as “intellectually rigorous, historically grounded, culturally nuanced and, in important respects, politically visionary.” One gets the impression Alterman just discovered a new book of the Bible.

“In many ways, Piketty has written a new Gospel, one that reinvigorates the insatiable and quasi-religious need of progressive economists to eat the rich, asserting that capitalism cartelizes wealth in the hands of society’s most well-off.”

In many ways, Piketty has written a new Gospel, one that reinvigorates the insatiable and quasi-religious need of progressive economists to eat the rich, asserting that capitalism cartelizes wealth in the hands of society’s most well-off. And too much owned by too few is bad. He uses a vast array of data to show that wealth inequality is on the rise, much like in the late 19th century; unless governments jump in to shake down the moneyed, we”ll all go back to the days of indentured servitude. Or something.

For the simpleminded, the reasoning sounds all well and good. As Taki’s own Theodore Dalrymple points out, the Piketty pathology finds its root in envy and resentment. There’s nothing noble about wanting to rob those richer than you. It’s a base instinct reliant on a childish understanding of what constitutes moral behavior. A large portion of the economic profession has spent the past century rationalizing government theft from the wealthy. That means a great number of economists are overgrown brats unable to accept the truth that some people are just more productive than others.

It turns out Piketty’s appeal to thievery isn”t all that’s corrupt about his work. Chris Giles of the Financial Times recently discovered that some of the data trends in Piketty’s book may have been fudged. “Some numbers appear simply to be constructed out of thin air,” he writes. As regards his data on the distribution of wealth in the United Kingdom, the info Piketty presents is not on par with official statistics. As Giles notes,

Professor Piketty cited a figure showing the top 10 per cent of British people held 71 per cent of total national wealth. The Office for National Statistics latest Wealth and Assets Survey put the figure at only 44 per cent.

The chicanery doesn”t stop there. According to Giles, after “FT cleaned up and simplified the data,” the stats on Europe “do not show any tendency towards rising wealth inequality after 1970.” To make matters worse, Giles also points out that, aside from some apparent transcription errors, Piketty “simply adds 2 percentage points” to an Excel formula in order to fulfill his predisposition. Giles claims there’s “quite a lot of this sort of thing in his spreadsheets.”

For the United States, Piketty yet again appears to make up data to fulfill his theory that wealth inequality increased at the end of the 1900s. Even for the modern data available, the French economist can”t help but adjust the numbers to make things appear worse than they actually are. Under Piketty’s reasoning, America is once again experiencing a dangerous burst of wealth inequality. But as economist Bob Murphy shows, the “U.S. is currently hovering near the lowest level of wealth concentration in the hands of the 1% in recorded history.”

Piketty at first responded to the FT findings in a rather congenial manner, admitting his collection of empirics may be lacking. But then in an email to Bloomberg News, he doubled down on his obviously flawed statistics and claimed “there’s no mistake or error” in his work. I guess you can respect the man’s persistence.

Data debauchery aside, there is something more fundamentally wrong with Piketty’s approach to economics. Anyone brought up on post-New Deal economic science has been taught that positive methodology is the only legitimate means to interpret market phenomena. Aggregate data is viewed as the guiding force for all economic trends. Both the Keynesian and Monetarist schools look to empirics to derive cause and effect. They call this method “scientific” as it corresponds nicely to the scientific method. Piketty’s work was at first largely commended precisely because of its reliance on historic figures which were used to draw conclusions.