The Loneliness of the Cord Cutter 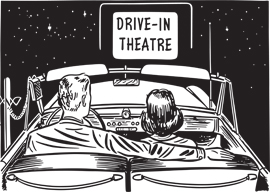 Have you ever watched a great movie on your tablet and, as the closing credits rolled, felt a profound sense of loneliness?

The same thing can happen with a book. Great fiction should be spoken, not read silently. There’s a sense, when the narrative ends, that someone should have been there with you, that the experience was intended to be communal—you were supposed to be with other people, and so your joy is bittersweet. Yes, you can go annoy your friends with “I just read the most amazing book” or “I just saw the most amazing movie,” but the adrenaline rush at the third-act climax is mixed with “Why was I alone? I must tell someone, I must talk about it, I must proclaim this.” You’re trying to build an audience postmortem, construct a group of sympathetic listeners who should have been there with you. People ask me, “Why are there so many horror bloggers?” Because many hardcore horror fans grew up as misfits, sneaking around so their parents wouldn’t know what they were watching, missing the community of fellow horror devotees, and so now they get to talk about it. They’re looking for soulmates.

Wall Street has been telling us for some time now that theaters are dead—not just stage theaters, but movie theaters as well. And, as to the drive-ins, well, do they even exist anymore?

“This weekend, thanks to the Shudder TV streaming service, we’re going to try something insane.”

I have articles from the early ’60s talking about “the death of the drive-in,” and then I have articles for every successive year since then saying the same thing—that it’s only a matter of time before the last one locks its outer gates and rips down the all-weather screen. There’s been a six-decade elegy for the most democratic form of moviegoing ever invented, and still there are 400 of them that just refuse to die. Adding insult to journalistic injury, new ones pop up all the time to replace the ones that do close.

It seems that the drive-in has the spirit of Epidaurus, right down to the outdoor setting and the press of people from all walks of life moving in, out, and around a massive people’s proscenium. It’s fitting that the drive-in was invented in Camden, New Jersey, because that’s also the home of Walt Whitman. He would have sung its praises with italics and exclamation points. He would have seen it as a secular temple of Americanism.

I’m part of a vanishing breed called the movie host. That means I frequently travel to theaters to talk about movies that could easily be downloaded or streamed or accessed on YouTube, and I’m often asked by my less cinema-crazed friends, “What exactly do you do there? Why do people drive so far to be at these events?”

What we do there is we experience the movie as a group and then we discuss the movie as equals because we’ve all had the same emotional experience. I suppose, if we asked Camille Paglia or some other academic, they would tell us it’s some form of pagan worship.

No one ever talks about this. If you ask the specialty theater managers, they’ll tell you about the brilliance of the 35-millimeter film image (true), the awesomeness of the sound system (true), or the various ways the film has been reconstructed, preserved, enhanced, or changed by the director. None of these things matter. What’s essential is the crowd—and it doesn’t matter whether it’s five people or five thousand. What matters is the agreement that “We will tell each other stories and we will feel that rush of knowing who we are and where we are and why we are here.”

Netflix, the original streaming service, is now trading at $418 per share, up 100 percent from over a year ago, making it the 10th-largest internet company in the world. Netflix is considered the future of entertainment and therefore the future of storytelling. The company will spend $8 billion this year on original content, including feature films that will never be shown in theaters. I asked a friend of mine who works at a rival streaming service why Netflix doesn’t release its movies in theaters before releasing them to streaming, since that would just be extra revenue for Netflix, and he said, “Because it’s against their religion.”