The Long Slide From Gatsby 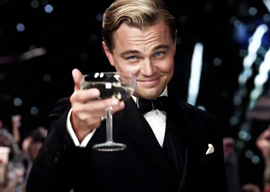 At an art shindig on Park Avenue, I spotted Baz Luhrmann, the director of the latest and very noisy version of The Great Gatsby. I found him a charming man before I was shocked—shocked à la Captain Renault—to hear the dwarfish mayor of the Big Bagel suggest an honorary American citizenship for that Russian son-of-a-bitch Roman Abramovich. Too bad I didn’t have my American passport with me, because I would have thrown it at him and told him to keep it. I can understand why some broken-down English toffs need to kiss Abramovich’s behind because they mistakenly think it beats working, but the grotesque Bloomberg is a billionaire many times over and needs not genuflect in front of a former plastic-duck salesman who belongs behind bars.

The ex-duck salesman parked his monstrous floating brothel downtown and came to Park Avenue with his floozy la Zhukova, both posing as art connoisseurs. If any of you reading this feel like puking, go ahead—I’m amazed that I didn’t, and I actually was close enough to touch them. Yuck!

“Our culture nowadays is dominated by the conspicuous vulgarity of new and ill-gotten wealth, while manners and morals are nonexistent.”

Then I thought of poor old Scott Fitzgerald. He wrote Gatsby, sold only 24,000 copies, died very much in debt, and now his masterpiece sells 500,000 paperbacks every year, the novel has been turned into a movie five times, and the latest version cost $105 million. How’s that for irony? I’d say worse than Bloomberg and the duck salesman posing as gentlemen.

The actor playing Nick Carraway, Tobey Maguire—who’s as tall as Bloomberg at 5 foot 8 inches—was asked whether he had loved the book and answered, “But I read the script, of course.” No Fitzgerald expert he. The movie is exactly what I had predicted a couple of months ago: Pearls, cloche hats, dropped waists, and lots of fireworks. It’s a tumultuous work that has about as much style as the fictional Gatsby parties. Still, it’s a far better film than the Robert Redford version of 1974, where the wooden Redford was as believable as Gatsby as Rupert Everett was playing General Patton.

For some strange reason, in the new version a very good Indian actor plays Jewish gangster Meyer Wolfsheim. Indians playing Jews to avoid charges of anti-Semitism is a first for me. The novel’s subtlety is nonexistent in the film, so here’s a tip: Forget the book’s subtlety and tenderness and watch the movie as entertainment. And enjoy the girl that plays Jordan, who should have been cast as Daisy, but more about casting next week when I will be filing from Cannes and walking the red carpet for the premiere of the greatest movie since Gone With the Wind, starring Alec Baldwin, Taki, and a cast of thousands. It’s directed by the great James Toback, a man so talented Orson Welles tried to poison him in a jealous rage but thankfully failed.