The Longest Distance Between Two Points 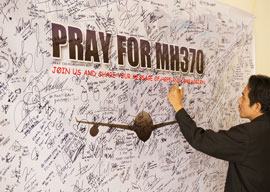 If there is one thing Americans love even more than a revolution, it is a mystery. Hence, the news from from Ukraine this past week got shoved aside in favor of the baffling case of Malaysia Airlines Flight 370. Unfortunately, as soon as the flight disappeared, the harebrains arrived.

While a rational person never rules anything out (no matter how improbable or unlikely), it remains a virtual certainty that aliens, multidimensional black holes, time vortexes, an Energizer Bunny in the cargo hold, and spontaneous pilot suicide were not at work in this case. However, with rampant “conspiracy theories” about Flight 370 from laymen and the media, some sensible discussion is required.

Anyone with a basic knowledge of aeronautics knows that air at lower elevations is denser than at higher altitudes. Therefore, it requires more fuel to travel equal distances if one is flying low enough to evade ground-based radar. The fixed radii of possible destinations appearing everywhere from CNN to local network affiliates are all wrong because they do not take such variations into account.

Two, the distance required to land a 777 is different from that which is required to launch a 777. The minimum optimal space needed to put one on the ground is 3,800 to 5,200 feet of runway, dependent upon weight. More length would be necessary to get the same plane aloft, but if some variation of a hijacking scenario proved valid, it is reasonable that the perpetrators may intend to hide the vehicle for delayed retrieval or later runway extension. Any amateur “aircraft expert” anchor who doesn’t distinguish these isn’t worthy of credence.

Third, non-object expanses on your screen may be greater than they appear. Many people do not realize that most air traffic flows in regulated airways and therefore the sky is not full of liners wandering the shortest distance between two points. This drastically reduces the expanse of ocean that other aircraft routinely witness. For example, if you were driving on the highway and another car located in a farm field sitting five miles off your route exploded, you would never see it. (Though it should be noted that in 20 years of service no Boeing 777 has ever blown up in the air.)

There is much talk about turning off the transponder. What a transponder does is signal position and call sign of the aircraft during flight. However, many people (again, TV journalists included) seem to believe a transponder is the only way planes can be detected, as if disengaging the transponder makes the flight effectively invisible.

Everyone with aeronautical experience knows this to be ridiculous. Any ground radar installation within reading would pick up the flight even with the transponder disengaged. It would appear as an unidentified craft, but it most certainly would be visible. Ground operators at that point would attempt to communicate for clarification. Absent a response, they would inform the proper authorities.

So far as is now known, no facilities other than satellite “pings” picked up the flight. One would surmise that either the aircraft was over open waters where no ground radar was in range (not exceptional in the South Pacific or above any ocean expanse), or it flew low enough to Earth not to register. However, that can only be a deduction for those with no experience in the Orient where many radar installations are half-functional at best and often in non-working condition. Bribery also cannot be excluded.

As for the hypothesis of landing at a hidden airfield, it is not nearly so fantastic as it may seem at first blush. All one needs to make an “airport” is a GPS location and a suitably stable length of space. A skilled pilot with computer navigation could land anywhere in the world, even at night, under such conditions. Important to note is that if the plane traveled west in flight it would still be dark when landing occurred.

Moreover, it would hardly follow that a “secret base” (Ã  la James Bond) need be constructed for such an endeavor. All over the world lie abandoned strips such as disused military bases and former private airfields. If properly reconnoitered and prepped beforehand, even a deserted industrial park could be utilized. Southeast Asia has all of these in abundance.