The Love That Won’t Shut Up 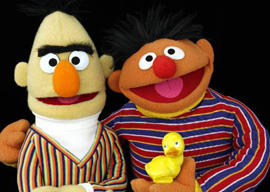 Maybe it’s my age—or maybe life really is getting crazier—but even for California, it feels ever more to me that we have slipped down a rabbit hole. The latest evidence for this is the push to have the characters Bert and Ernie on Sesame Street get married. I don’t know what’s crazier: that the idea has gotten airtime, or that the show’s management felt compelled to issue a denial. I grant that Sesame Street is an institution for many (though not for me; I’m too old, and my childhood puppet show of choice was the very hetero Fireball XL5). It is also obvious that many gays want prominence in institutions—the Episcopal Church and the US Armed Forces come to mind. But I have three major objections to the current effort.

“In a society ever fearful of pedophile priests, it is astonishing that either state or media should play the role of sexual initiator.”

The first, and most obvious, is the real crime of embroiling children in sexual issues—“no child left behind” is fast becoming “no child left alone,” as Governor Brown and the queens of our State Assembly might tell you. In a society ever fearful of pedophile priests, it is astonishing that either state or media should play the role of sexual initiator. It is fashionable to denounce the notion of the latency stage; but while I am no Freudian, it is obvious that there is an intermediate stage between toddlerdom and puberty when kids are uninterested in sex unless, shall we say, it is brought to their attention. Coincidentally, this is also the period when their basic outlook forms—doubtless so that they shall deal with the Sargasso Sea of sexuality from more of a position of personal power (to the degree that anyone can). It is no shock that child molesters who were themselves victimized in youth or childhood are generally attracted to those of roughly the same age that the crime was done to them. Nor is it much of a shock that most cultures try to fill the heads of children of that age with whatever the society considers heroic, moral, or uplifting. This outlook dominated, for example, the artwork in such major public libraries as Los Angeles and Boston. It might be (and has been, ad nauseam) argued that such views were unrealistic, given the number of children who are sexually molested. But one might as well assert that since some children are beaten or starved, the rest should be in order to purge them of illusions.

Secondly, if we are going to sexualize children—and not just through puppets enjoying gay marriage, but through sex ed, ever more explicit sexual references in kid shows, slutty teenybopper fashions, and the kind of kiddie beauty pageants to which the late JonBenet Ramsey was subjected, it is time to stop persecuting as slime the ranks of molesters and kiddie-porn purveyors and start embracing them as pioneers. In a society that constantly encourages everyone to have as much sex as possible, it must be recognized that all who respond to that call will do so in accord with their own bent. If, as a culture, we wink at the aforementioned practices but jump all over molesters when caught, we are simply being teases.