The Magical Hip-Hop Get Out of Jail Free Card 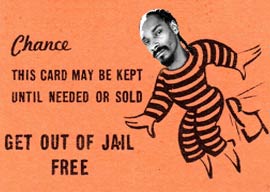 Barack Obama’s greatest talent is his ability to take unabashed lawbreakers or wannabe cop-killers and suddenly turn them into unapologetic cheerleaders for big government. And he’s apparently able to do this solely through the magical mystical powers of his skin color.

Among the reasons not to vote for Romney:

1. He is a white nigga.
2. This muthafucka’s name is Mitt.
…
7. He always interrupts and talks over people like he’s better than them. Bitch I will beat the shit out of you.

Among the reasons to pull the lever for Obama:

At a “Community Sound Off” session on the Huffington Post, a predictably estrogen-charged, fake-ghetto-talking group of commentators referred to Snoop’s list as “pretty entertaining,” “hilarious,” and evidence that Snoop is “a smart guy.”

“Double standards are by their very nature designed to keep people divided.”

This is the same Snoop who has several convictions for drug possession, illegal possession of firearms, and was the driver during a gang-related killing. It’s the same “smart guy” who at one point, according to Wikipedia, made a mid-career marketing decision to abandon “his ‘gangster’ image and embrace…a ‘pimp’ image” and also claims that around 2003-2004 he literally worked as a pimp. He’s also a member of the Nation of Islam, which teaches that white people were created by an evil scientist named Yakub.

Still, none of this has prevented Snoop from doing multiple lucrative ad endorsements, appearing in a children’s Christmas special, having his own reality show that demonstrates what an upstanding father he is, and rocking the house on the old Donny & Marie program.

Mega-millionaire rapper Jay-Z, who was mentioned on Snoop’s list, also possesses the mysterious ability to be an unabashed criminal who somehow still finagles giant ad endorsements and supports the Almighty State now that there’s a black president. Jay-Z shot his own brother when he was 12. He was also a crack dealer by age 13 and pled guilty to a 1999 stabbing of a record producer.

He is also a personal friend of Barack Obama‘s and recently raised a reported $4 million at an Obama fundraising dinner. And, like Snoop, Jay-Z said he voted for Obama because he’s black. He even did a song about it. And although he once recorded a song referring to a rival MC as a “fag,” Jay-Z now says he always supported gay marriage, presumably because, you know, now there’s a black president and it’s some sort of civil-rights issue or something.

Jay-Z’s former hip-hop blood enemy Nas, the aforementioned “fag,” has also recorded a song cheering the fact that we have a black president, even though Nas reportedly owes the IRS over $6 million in back taxes.

Barack Obama and the hip-hop community have a long history of mutual love and respect. In 2006 while an Illinois Senator, Obama had a private meeting with Atlanta rapper Ludacris to discuss “black youth issues,” despite the fact that Ludacris had spit lyrics that seem to call for murdering policemen (“Oink Oink, Pig Pig, do away with the pork”). But during the 2008 presidential campaign when some harsh Ludacris lyrics against John McCain threatened to derail Obama, Ludacris was thrown under the same bus as Reverend Jeremiah Wright.