The Magical Mystery of Monarchy 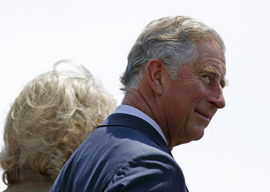 The Prince of Wales and the Duchess of Cornwall

The British public periodically goes ape over silly things such as cricket, Twiggy, the occasional sunny day, the Chelsea Flower Show, Guy Fawkes Night, and the not-so-direct descendants of King James I, whom Guy (AKA Guido) tried to blow up on November 5, 1605.

Although James I was a Stuart and Elizabeth II is a Hanoverian, she wins the popularity stakes hands down because old Jimmy believed he was appointed by God. This brought him into conflict with the English Parliament, who distrusted his judgment on most issues.

This June, under constant rain, floods, and the threat of a transport strike, the Brits yet again went ape over the Queen’s Diamond Jubilee, marking her 60th year on the throne. In four years the Queen will surpass her great-great grandmother Victoria in length of service, something she should easily do as she’s in excellent health and has all her wits about her. Then the Brits once again will go ape and continue doing so for every year of her reign.

“A king’s duty is to remain above politics and call a halt when the ship of state is about to crash into the rocks.”

Watching her going down the Thames”on a barge festooned with gold leaf and all sorts of heralds, shields, crowns, and whatever else the Brits stick up on walls to show that once upon a time they were an important nation”was almost touching. I say “almost” because it was a show to please the masses, draw the tourists, sell newspapers, and show appreciation for the number-one draw to this wet and gloomy island. There she was, an 86-year-old lady standing for hours on end in the cold, smiling and waving and occasionally sneaking a look at her 91-year-old husband, Phil the Greek, who just as bravely stood up like the man that he is and ended up in hospital soon after.

Except for the Middle East, monarchies today are largely ceremonial. Royals have become the appendix of the body politic. Most seem to exist to sell gossip magazines and keep the fashion industries humming.

Simeon II of Bulgaria was an exception. He ascended to the throne as a child in 1943, was forced into exile by the communists three years later, but ran as Simeon Saxe-Coburg and was elected Bulgaria’s prime minister in 2001. Simeon is very learned, modest to a fault, extremely polite, and a man I respect very much. He is now retired and lives a very private life.

My good friend King Constantine of Greece lost his throne in a rigged referendum in 1974″it was rigged by the fathers of the same politicians who have run my country into the ground. Had he been head of state I like to believe he would have called a halt to the corruption that saw EU money distributed to buy votes rather than invested in the country’s infrastructure.