The Man Who Blew the Lid off Maoism 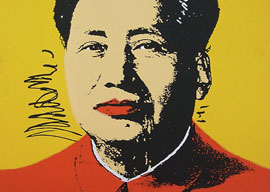 I was slow on the uptake in understanding Chinese communism’s awfulness. I”d been a lefty in my student days without knowing anything much about China. Toward the end of those days, female Chinese author Han Suyin published A Crippled Tree, an account of her parents” lives in early 20th-century China written from a standpoint of hostility toward all the things Maoists hated: landlordism, urban capitalism, colonialism, Chiang Kai-shek, and “the old society.”

The book impressed me so much, I went to see Ms. Han speak at the Friends” Meeting House in London, which was next door to my college. This was 1966, only four years after the Great Mao Famine, in which tens of millions of Chinese starved to death. The communists had stifled news of the famine”I knew nothing about it”but one audience member somehow knew of it and asked a pointed question. Ms. Han fielded the question deftly, in phrases you still hear from Mao’s apologists: freak weather conditions…bad harvests…strict but equitable rationing. I am sorry to say I swallowed her bogus explanations.

“To anyone paying attention, the Chinese communists were no longer agrarian reformers, champions of social justice, or heralds of a new age: They were just another lying clique of totalitarian gangsters.”

(In lives lost, some say the famine was the century’s greatest human tragedy”worse than WWII. It remained unknown to the general Western public for decades, though. In 1996 I went on a book tour to promote a novel in which I had included a passing mention of the famine. More than one thoughtful book-buying American asked me whether such a thing had actually happened. There have since been several good general accounts.)

My ignorance lasted somehow through the early years of the Great Cultural Revolution (1966-76). What woke me at last from my complacent slumber was a 1978 book titled The Chairman’s New Clothes. The author’s name was given as Simon Leys. He obviously knew his China”ancient and modern”and he wrote with scholarly authority but in plain, accessible language.

The Cultural Revolution was something of a mystery in the West. There was a cottage industry of China experts on TV and in the newspapers offering explanations of what was going on, but they contradicted one another. Simon Leys made the whole thing clear. Mao, far gone in megalomania and having eliminated all challengers to his leadership, was remaking the Party and the nation to fit his own wildly romantic imagination.

A year earlier Leys had published Chinese Shadows, a withering account of the sterility, cruelty, and cultural destruction of those years (1966-76). By the end of the seventies, in large part thanks to Leys, it was no longer possible for an honest Westerner to be an uncritical admirer of Mao’s revolution. To anyone paying attention, the Chinese communists were no longer agrarian reformers, champions of social justice, or heralds of a new age: They were just another lying clique of totalitarian gangsters.

“Simon Leys,” we soon learned, was the pen name of Pierre Ryckmans, a Belgian-Australian sinologist. He had published under a pseudonym to preserve his access to China: The communists did not issue visas to persons known to be “unfriendly to the Chinese people””that is, to the Party. His cover was soon blown. He went on to produce many more books, some under one name, some under the other. Among them is one of the best translations of the Analects of Confucius.