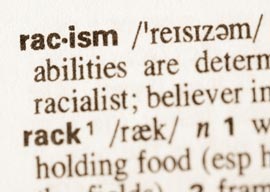 We see it every day. Pick a news story, any news story, and it’s guaranteed that some journalist will spin it to scream “racism.” Look at the past few weeks. David Letterman’s farewell? “Unbearably white.“ The National Spelling Bee? White racism has “cast a pall” over the event (apparently these days a dozen anonymous tweets have the power to “cast a pall” over a national event, at least according to the journos who gave the tweets top billing over the event itself).

But the biggest “let’s put a “racism” spin on it” story of May 2015 was the Waco biker brawl. Jim Goad had a great take on this, but I”d like to examine a different angle: the “snipers.” These are the journalists who use every story du jour to cry racism. I call them “snipers” because they”re not looking to debate, discuss, or engage. Their M.O. is simple: make an outlandish claim, and then retreat behind the safe walls of the media corporation that employs them.

“Their M.O. is simple: make an outlandish claim, and then retreat behind the safe walls of the media corporation that employs them.”

My first run-in with a media race sniper was in 1999, when I was an occasional op-ed contributor to the L.A. Times. Periodista Alisa Valdes (then Valdes-Rodriguez) had been hired away from The Boston Globe to provide a Latina perspective for the Times” entertainment section. Each article she penned was indistinguishable from the last: “Whites are racist.” If I link to one (“whites are racist for enjoying Lou Bega’s remix of Mambo No. 5, and Lou Bega isn”t entitled to sing it because he’s “Italian and Ugandan!”), I”ve linked to them all.

But one piece made even my jaded head do a neck-popping double-take. Remember back in June 2000 when over fifty women were assaulted in New York during the annual Puerto Rican Day Parade? Valdes wrote that following the attacks, the media tended to “blame the youths themselves, or their race and ethnicity” for the violence. Yes, she said the media blamed the violence on the attackers” race and ethnicity. In her paranoid worldview, it seemed so reasonable, so probable, that Tom Brokaw or Peter Jennings would open the news by saying “Today over fifty women were assaulted in New York by filthy Puerto Ricans who were only doing what their foul genes command, the lousy spics,” that she never actually felt the need to find one single example of anyone in “the media” blaming the attacks on race or ethnicity. For months, I emailed her, phoned her, and generally pestered her to name one example of this.

She ducked me at every turn.

In January 2001, she left the Times, accusing the paper of (what else?) racism. Quite obviously relieved by her departure, Times associate editor and ombudsperson Narda Zacchino (an honest journalist who would herself soon flee the sinking Times) spoke with me about Valdes. I asked her if she thought Valdes” claim about the media blaming the race or ethnicity of the attackers sounded legitimate. She replied, “No, no. She did another commentary piece about where the term Hispanic came into usage and she was off by a couple of centuries. I pointed out to the editor when she left that we probably in my office had more complaints about accuracy of things that she wrote than any other reporter.” Zacchino agreed Valdes should have been “given more scrutiny.”

And Valdes? She landed safely on her kitty-cat patas. Her journalistic fabrications led to a $500,000 book deal from St. Martin’s after a bidding war for her first novel, “Dirty Girls Social Club” (think “Sex in the City,” but with gratuitous use of the word papi). In 2009, NBC was planning to develop the book as a TV series, until Valdes killed the deal by publicly accusing the producers of (you guessed it) racism.

I bring up Ms. Valdes to illustrate how, when it comes to media race sniping, everything old is always new again. Within hours of the Waco biker brawl last month, the snipers were doing what they do best, taking shots, then ducking and hiding. Jesse Holland, the AP’s “race and ethnicity writer” (yes, that’s his title), complained about the media’s focus on “black-on-black” crime and issues like absent fathers. He grumbled that no one was using the Waco shootings to focus attention on “white-on-white” crime or white absentee dads.