The Melancholy Roar of Retreat 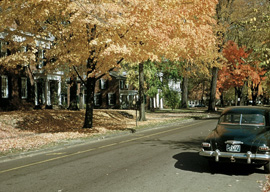 One of the schoolmasters in charge of my Anglican religious instruction used to say that a good hymn is one that leaves you feeling absolutely terrible.

I feel the same way about Pat Buchanan’s books. By this measure, Suicide of a Superpower is a very good Buchanan book. With chapter headings such as “Demographic Winter,” “The Triumph of Tribalism,” and “The Long Retreat,” you can practically hear the bugles calling from sad shires.

If you read Pat’s books or columns (or mine, for that matter: I’m quoted a generous four times in Suicide of a Superpower, way more gratifying than the one lousy passing mention I get in this fall’s other nonfiction bestseller), you’ll know the themes:

• The melancholy, long, withdrawing roar of Christianity in retreat.

• The denial of human nature, and of normal, harmless human affinities.

• Incomes stagnant for the middle class and cratering for the working class.

“Buchanan is as bold as it is possible to be if you don’t want to be relegated to the commentariat’s outermost fringes.”

• The Republican Party vote swamped by waves of immigrants.

The crises that afflict us—culture wars, race division, record deficits, unpayable debt, waves of immigration, legal and illegal, of peoples never before assimilated, gridlock in the capital, and possible defeat in war—may prove too much for our democracy to cope with. They surely will, if we do not act now.

Then what must we do to be saved? Pat offers some suggestions, none of them surprising: Stop garrisoning the world, downsize the federal government, bring back the tariff, and overhaul immigration.

Will any of this actually happen? I suppose some of it might, but only from sheer necessity; there is no will to make any of it happen.

It is possible that at some point, with gas at twelve hundred dollars a gallon, Hoovervilles on the National Mall, and family pets vanishing into cooking pots, we shall draw down the 9,779 troops we have stationed in Italy, defund the NEA, and stop giving public assistance to illegal immigrants.