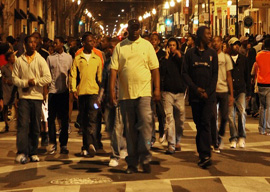 Though few Americans realize it, Memorial Day has roots that are partially racial in nature. It was originally called “Decoration Day” and was first celebrated by a group composed entirely of black Freedmen in Charleston, SC, to honor Union soldiers—nine in ten of whom where white—who’d died in the Civil War.

This past Memorial Day weekend was anything but civil, but in many places it looked like a war. And people may remember—or even commemorate—this year’s “festivities” a hundred years from now.

In all the news footage I’ve seen and every online account I’ve read of these events, the troublemakers—the ones throwing gang signs and roving in huge packs and attacking random strangers and often planning such mayhem on Twitter and Facebook—were somewhere in the ballpark of 99 to 100 percent black.

Forgive me, Lord, for what mine own eyes hath seen is racist.

A recap of this year’s Memorial Day weekend mob violence, starting with the least intense and getting worse from there:

A series of “fights…between teenagers” led to the shutdown of a water park in Decatur, AL. An “unruly crowd” that included “people jumping the fence to get into the park, creating chaos inside the park” and leading to “several fights” prematurely closed down Nashville’s Wave Country water park for the first time in 30 years.

In Milwaukee, police “mistakenly” closed a city beach after overestimating traffic and pedestrian “congestion.” At least that’s what they said. However, eyewitness Shaylen McCaskill—who is black and therefore cannot be racist—told TV reporters, “They was jumping on cars and jumping around and throwing up gang signs.”

“These digitally orchestrated and monolithically black mob attacks only seemed to start after Obama was elected.”

In Long Beach, NY, a “melee involving hundreds of people…spilled out onto the streets and a nearby bus depot…and continued for several hours” until police finally regained the upper hand.

Police in Rochester, NY, shut down a beach park near the city’s annual Rib Festival “when fights broke out among at least 100 youth.” A female witness said “There was a group of young gentleman [sic] running through the parking lot, saying something like someone’s getting beat up, and next thing you know there are 20 cops, ambulances, fire trucks….”

Chicago cops said they shut down North Avenue Beach because tiny-fingered Mayor Rahm Emanuel claimed they’d received a “tremendous amount” of calls regarding heat exhaustion. But the high temperature in Chicago on Memorial Day was only 88 degrees and only four people were taken from North Avenue Beach to local hospitals for heat-exhaustion relief. And none of Chicago’s numerous other beaches were closed that day. The mayor’s “heat exhaustion” alibi has lost so much credibility, even CBS News is beginning to question it. Before the beach was shut down, callers to local radio station WLS said they saw “dozens of gang bangers pushing people off their bikes.” Reputed eyewitness descriptions on the Chicago crime blog Second City Cop were more graphic (comments reprinted as they were typed):

I was at the lake front today and here is what I saw; A completely out of controll group of “teens” at the Oak St. Beach and at the Olive Park Beach. They were knocking people from their bikes at the Oak St. beach and then laughing and high-fiving each other. The nice northsiders were completly taken aback when the “teens” would push them from their bikes.

There were over 2,000 teenagers (being PC) who flocked to the beaches and proceeded to fight, attack others, rob, and destroy anything they could get their hands on.

In one eight-hour span in Myrtle Beach, SC, during Black Bike Week, police were called to respond to reports of a stabbing, a shotgun being pointed at a security guard, a shooting, and a quintet of armed robberies. Nevertheless, the NAACP is suing a restaurant for alleged discrimination against black bikers.

Three times over four days, Boston police were called to quash large-scale disturbances on the south side’s Carson Beach to break up gang fights among “1,000 youths who have used social media sites like Facebook to plan unruly gatherings….” Carson Beach became famous back in 1977 when segregation-busting South Boston police escorted black sunbathers there to protect them from presumably racist Southie whites.

In Charlotte, NC, early Sunday morning after the Speed Street festival, “things got chaotic” amid a crowd estimated at 30,000, leading to “many fights” that culminated in the shooting death of 22-year-old Antwan Smith. Another 22-year-old, Durante Kavon James, was shot in the leg. Police made over 70 arrests.

Also early on Sunday morning, shots rang out during Miami’s Urban Beach Weekend, which draws an estimated 300,000 visitors who are “almost exclusively African American” and whose presence nearly doubles the city’s population. Gunplay ensued after one overeager reveler allegedly tried running over a group of police and pedestrians with his car. At least seven people were injured, including three policemen, and the accused vehicular assailant was shot dead. Around the same time, a black Miami poet was murdered outside his café in what was thought to be a deliberate hit. When local gay activist Herb Sosa complained that he saw “six cars parked on my block with their mirrors ripped off, their antennas ripped off” and called for an end to all future Urban Beach Weekends, he was called a racist.