The Men That Others Forgot 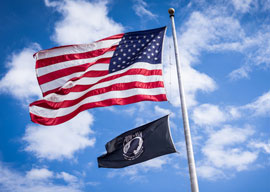 On September 20, 2013, President Obama flew the black flag above his White House to honor prisoners of war and soldiers still missing in action.

If you were unaware of this, it is not surprising. The proclamation was quietly released to the media without a televised speech. On the day itself the Commander-in-Chief did make a public appearance…where he spoke about the debt ceiling instead.

It brings to mind December 7, or Pearl Harbor Day, which Americans and their president still widely commemorated until the late twentieth century. Contrast this against only the twelfth anniversary of September 11, which went by largely unnoticed, or at least with far less dignity than it deserved.

All that morning I looked for a nationally televised “Reading of the Names” but all I found were snippets of lives cut short. NBC, to their credit, formerly would show the events as they happened from roughly 7AM until noon on their channel. However, a dozen years is apparently beyond most Americans’ attention span, and this tribute had been shuffled to MSNBC in favor of sex tips and relationship advice.

“Here is a review of American POWs from our past century of warfare.”

Mainstream channels such as CBS carried The Chew and General Hospital. ABC offered Shark Tank and Modern Family. That night on FOX was the X Factor premiere and MasterChef. Educational stations were marginally better, though largely offering only somewhat related material.

CNN was scheduled to broadcast The Flag concerning the whereabouts of the 9/11 site’s iconic banner, but it was preempted by gnarled swimmer Diana Nyad explaining to anyone who cared why she was more important than thousands of dead Americans (at least that is what I took away from the presumption of her televised whine about a dubious achievement).

September 11 and its aftermath led to the sacrifice of over 6,500 American lives and direct costs of at least 750 billion American dollars. In the Twin Towers alone over 2,900 people died.

Whoever was responsible and for whatever reason, these were innocent victims who are worthy of our recollection, at least for a single day a year.

Mercifully I did not know any victim on 9/11, but it moved me in a way few such tragedies have. Perhaps this is because less than two weeks after the event, locals on the scene arranged for some of us to take a tour of the site in person. It was around midnight and the monstrosity under the Klieg lights was reminiscent of a Gothic nightmare. We stood to watch as men searched for their lost brothers, and it is not something to be forgotten.

All this happened barely a decade ago, but it seems a dwindling portion of the country even cares. I don’t think it is too old-fashioned to pay homage to your dead or to venerate your missing.

Thus in honor of an almost unnoticed day, here is a review of American POWs from our past century of warfare:

World War I … Entering the war midway, American POW numbers were significantly less than other participants yet still numbered roughly 4,000.