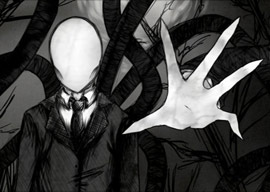 It all seemed so deliberate.

According to court documents, on May 31 two twelve-year-old Wisconsin girls led a female classmate into the woods and stabbed her 19 times, leaving her for dead. Under police examination, the pair of girls said they”d been planning to kill her for months. (She survived.)

Police say the two girls had originally plotted to murder their victim during a sleepover. Their plan involved duct-taping her mouth shut, stabbing her fatally in the neck, and pulling the covers over her corpse to give the appearance that she was sleeping. Instead, they switched gears and agreed to kill her the next day in the bathroom of a nearby public park, which had a floor drain they thought would hide the blood as it oozed from her dying body. When one of the alleged perps panicked in the bathroom, the girls again altered their plans and led their victim into the woods to play hide and seek.

According to the allegedly self-incriminating testimony of 12-year-old Anissa Weier, after stabbing the girl, she told her to lie down and be quiet, which would make her lose less blood as she and her accomplice went to get help. Weier told police that she never intended to get help. She said she only wanted the victim to quit screaming and drawing attention to the crime scene as the life ebbed out of her.

“The very idea of “mental illness” is schizoid. It implies that the “illness” is somehow a separate entity from the person.”

The girls also told authorities that they committed the crime to appease Slender Man, a tall, slim, faceless fictional online horror character who has the ability to grow long tendrils from his hands and back. They became obsessed with Slender Man after viewing horror website Creepypasta Wiki. They said they believed he resided in a Wisconsin mansion and that they”d go live with him after offering him this blood sacrifice.

The girls” neighbors expressed shock, claiming that they were “very nice” and came from “normal, middle-class” families. The two are being charged as adults with intentional homicide and could face up to 60 years in prison if convicted.

Given their alleged elaborate planning, I also doubt that the girls” tender age absolves them of ill intent. Children are far smarter than adults tend to acknowledge. Most adults seem to forget being children. Perhaps that’s part of the brain degeneration and diminished responsibility that comes with adulthood.

But that will never stop a defense lawyer from seeking a cheap cop-out. “She’s 12 and she has mental health issues,” said Anthony Cotton, one of the girls” defense attorneys. “There’s no question that she needs to go to the hospital.”

Whenever someone says there is “no question” about any given matter, my first instinct is to question it. And the very idea of “mental illness” reeks to high holy heaven of bullshit to me. It reminds me of other obvious falsehoods such as the idea that rape has nothing to do with sex, that race doesn”t exist but racism is everywhere, and that alcoholism is a disease rather than a character flaw.

The very idea of “mental illness” is schizoid. It implies that the “illness” is somehow a separate entity from the person, thus casting responsibility on the illness rather than the person. Isolating the illness allows one to pretend that their personality is infected with a germ, when the more likely explanation is that they simply have a bad personality. The fundamental error in the idea of “mental illness” lies in creating a fictional duality between the person’s imaginary affliction and the core of their very being.

This in no way discounts the reality of neurological disorders. Those are physical conditions that can be quantified. But in most cases, “mental illness” seems like a cheap and dishonest way of avoiding what are fundamental character flaws.

Despite his later unfortunate collaborations with Scientologists, Thomas Szasz nailed this concept in his 1960 essay “The Myth of Mental Illness,” which was expanded into a bestselling book a year later:

Mental illness, of course, is not literally a “thing”—or physical object—and hence it can “exist” only in the same sort of way in which other theoretical concepts exist. … As such, it is a true heir to religious myths in general, and to the belief in witchcraft in particular. … Our adversaries are not demons, witches, fate, or mental illness.  We have no enemy whom we can fight, exorcise, or dispel by “cure.”  What we do have are problems in living—whether these be biologic, economic, political, or sociopsychological.