The Mess Before Maria 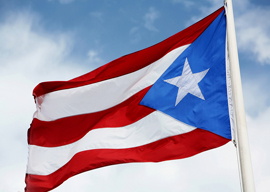 Puerto Rico is a test case of whether nationalism is as dispensable as the heightening conventional wisdom assumes.

Puerto Rico possesses many of the attributes assumed to represent the utopian post-national future, such as open borders with the United States, diversity, and a lack of national sovereignty.

Yet, as demonstrated once again by the current post-hurricane crisis of electricity outages, in part caused by the power company failing to trim trees, Puerto Rico is instead a pit of corruption and fecklessness.

Obviously, U.S. taxpayers will wind up paying to turn the electricity back on. But Puerto Rico is illuminating about the long-run sustainability of any system not based on national sovereignty and accountability.

Nobody washes a rented car and nobody treats Puerto Rico like it’s his or her own country.

For instance, the island has unbelievably ineffective public schools. Puerto Rican students in the United States are not terribly high-scoring, of course, but Puerto Rican public-school test scores are abysmal. On the federal 2015 National Assessment of Educational Progress test (in Spanish and specifically designed for Puerto Rico), zero percent of island public-school eighth graders scored at either the Advanced or Proficient levels. Six percent scored Basic, and a staggering 94 percent performed Below Basic, the lowest tier.

In contrast, on the mainland, 60 percent of Hispanic students, or ten times as many, scored Basic or above.

Similarly on the international 2015 PISA test in math, Puerto Rico did worse than 62 countries (including Mexico and Trinidad), about the same as seven, and better than only three (Kosovo, Algeria, and the Dominican Republic).

Due to low teacher salaries, Puerto Rico spends less per student than every state except Utah and Idaho. But in some opaque-sounding administrative budget categories, it spends more per student than any state.

“Nobody washes a rented car and nobody treats Puerto Rico like it’s his or her own country.”

Indeed, the word “opaque” comes up often in answers to questions about where the money goes in Puerto Rico. For example, an outside report on the Puerto Rican power company noted, “PREPA’s budget allocation process is opaque and distortionary.”

The problem of Puerto Rico’s atrocious public schools gets virtually zero coverage in the States because, well, Puerto Rico doesn’t seem like our country. Everybody there speaks Spanish, so it’s hard to follow what’s going on. And you might get called “racist” for mentioning Puerto Rican test scores, so why bother?

Conversely, most Puerto Ricans don’t see the dire performance of their public institutions as their long-run problem either, since they can always bail out to Florida.

Post-nationalism is marketed as the solution for the problems caused by nationalism. But how exactly it is supposed to work is seldom specified.

With the dismantling of empires after WWII, most of the world became divided up along national lines. For example, the United States granted independence to the Philippines in 1946, but hung on to Puerto Rico.

Decolonization led to much tumult, such as the Algerian and Vietnam Wars. Today, there are still disputes over where borders should be drawn, with Kurds and Catalans currently trying to secede from Iraq and Spain, respectively.

But by the Parade of Nations at the 2016 Olympics, there were 206 national teams participating.

One of them, interestingly, is Puerto Rico, which has taken part in the Summer Olympics as a separate nation since 1948. Puerto Rico has had 69 years to alert the International Olympic Committee to the fact that, legally, they are a commonwealth of the United States. But they haven’t gotten around to it yet.

As we’ve been reminded so often by the American media ever since the hurricane, Puerto Ricans have been American citizens since 1917. Granted, the notion of solidarity with fellow American citizens has not been a common theme in the U.S. press in recent years as the rights of illegal aliens (e.g., “Dreamers”) have taken precedence.

Puerto Rico was discovered by Columbus in 1493, but it usually played agricultural second fiddle to the larger island of Cuba, which served as the jewel in the Spanish crown until the Spanish-American War of 1898.

A recent study of Puerto Rican islanders’ genomes suggests they tend to be about 65 percent European by ancestry, 20 percent black, and 15 percent American Indian.

This shouldn’t be a hopeless racial mix. However, urbane Havana attracted a higher class of European immigrant. For example, the world chess champion in the 1920s, Capablanca, was a Cuban. The Cuban-born doctor Carlos Finlay made the crucial discovery in the 1880s that yellow fever was spread by mosquitos, which the American Walter Reed confirmed in 1901.

On the other hand, Puerto Rico, largely an agricultural island without much advanced development, tended to attract mostly landless farm workers. (The weak economic performance of their descendants suggests that America should be leery of helping American landowners import even more stoop laborers.)

Thus, when Cuba’s middle class relocated en masse to Miami after Castro declared himself a communist, Cubans quickly became prosperous in the United States. In contrast, Puerto Ricans began to flood into New York City when air service was established after WWII, but never mustered the human capital to take over New York the way Cubans took over Miami.