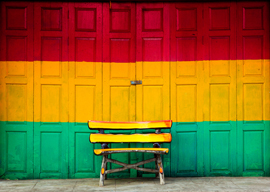 The Middle East and Asia occupy most of our foreign-policy interest these days, but relatively little attention is paid to our most important dangerous foreign contact: Mexico.

That isn”t to say that Mexico doesn”t call forth a lot of comment”usually about illegal immigrants, anchor babies, smuggling, and drug cartel killings. But all those things obscure a central fact”Mexico is a real country with problems all its own. Although it is dirt poor and does not restrict Americans” entrance into the country when they come to shop, drink, or whore in border towns, it is a different country with its own history, politics, and outlook.

America is willing to invest time, blood, and treasure in countries half a globe away with whom we have little or nothing in common. But geography, history, economics, and demographics dictate that we shall have an increasingly symbiotic relationship with Mexico whether we like it or not.

“The Mexicans are indeed at our gates; whether they will be barbarians or not depends a great deal on us.”

We need to keep several cogent facts in mind about our southern neighbors if we are to deal with them effectively. The first is that they are close. Poor border control has made parts of Big Bend National Park and southern Arizona virtual no man’s lands. This power vacuum poses an enormous terrorist threat. At least the same amount of energy that goes into scoping out Iran’s or North Korea’s nuclear arsenal needs to go into securing our southern border.

Sealing off Mexico and bringing illegal immigration to a standstill will not, however, solve anything beyond immediate security concerns. The loss of those immigrants” cheap labor would have an enormously negative effect on California’s economy, depriving countless politicians of nannies to underpay. It would also exacerbate the demographic implosion the immigrants have partially offset. But the elephant in the room”the replacement of Anglos by Hispanics”would be delayed rather than stopped.

There is, especially here in the Southwest in areas first settled by Spain and then ruled by Mexico, a fear that one day they”ll get their land back. This is exacerbated by the Indigenista mutterings of Aztlan proponents such as the Chicano activists I met while attending CSUN.