The Moral Implications of Dwarf Tossing 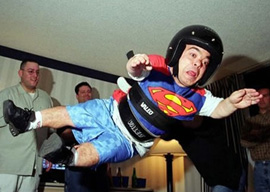 In late January of this year, an event occurred which may have dramatic implications for our conception of human dignity, our understanding of the individual’s place in society, and perhaps even for the eternal dream of achieving the brotherhood of man on Earth.

Or to phrase it less portentously: A bunch of drunken frat boys put a dwarf in a harness and hurled him across the floor of a strip club and onto a mattress.

For those unfamiliar with it, dwarf tossing is a competitive pub sport which involves the hurling of little people by bigger people. The dwarfs involved are willing participants and are financially compensated for their efforts, while the throwers get to test their physical strength by measuring how far they can toss said dwarfs. (A less popular variation is “dwarf bowling,” which involves throwing or pushing a willing dwarf”often tied to a skateboard”down the alley toward a set of tenpins). The sport of dwarf tossing is commonly frowned upon”frequently by advocates in the heighted community rather than dwarfs themselves”and its legality varies according to the national home of the dwarf in question.

“Dwarf tossing is far more widespread than you may have imagined. Little people are being thrown around all over this great big world.”

January’s event took place in the cheerfully sleazy border town of Windsor, Ontario”a city which already has an unsavory reputation for its strip clubs, massage parlors, and garish casino culture”and it attracted a considerable amount of sternly disapproving media attention. Canada’s major national newspaper The Globe and Mail ran an article by history professor John Sainsbury arguing that when we degrade one dwarf we degrade them all. With toothache-inducing levels of condescension, Professor Sainsbury called Windsor “the dwarf-tossing capital of Canada” and sniffed haughtily that, according to one’s ideological bias, “Windsor is now either a bastion of libertarian resistance to the nanny state or a miserable backwater of moronic culture.” (You get no bonus points for guessing which view the esteemed professor shares.)

Leopard’s Lounge, the popular Windsor “peeler” club which held the event, previously hosted a dwarf tossing extravaganza back in 2003 which led to a local MPP’s unsuccessful attempt to outlaw the sport. The repeat event early this year boasted a capacity audience, with a seven-page-long reservation list filled up weeks in advance.

“OK,” I hear you say, “so a roomful of tracksuit-clad knuckleheads go to a low-rent strip club to throw around a four-foot-eight dwarf named “Tripod” while he’s wearing a blue baby costume with a baby bottle and bonnet as props. That’s some kind of freak show outtake from a Jodorowsky movie, but it’s not necessarily an issue with wider social implications.” But dwarf tossing is far more widespread than you may have imagined. Little people are being thrown around all over this great big world. Consider the following:

In New Zealand, where the sport is legal, some English rugby players aroused controversy by apparently taking part in a dwarf tossing competition in their free time between Rugby World Cup matches last fall. The incident attracted some quasi-celebrity-based notoriety because of the alleged involvement of Mike Tindall, a player who recently married one of the Queen’s granddaughters, Zara Phillips.